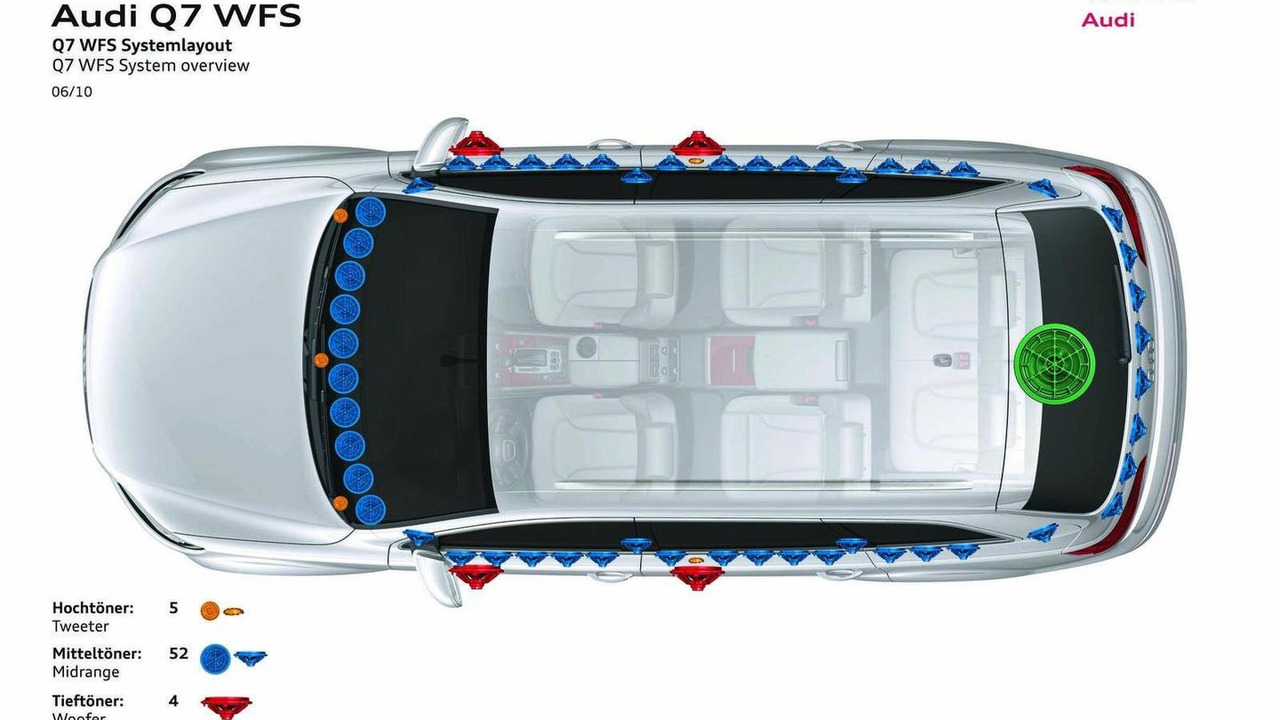 62 speakers surround the passengers in the Audi Q7 with the Audi Sound Concept prototype. Everyone gets an earful in this SUV. Details inside.

In a partnership with audio specialists at Bang & Olufsen, Bose and the Fraunhofer Institute for Digital Media Technology, Audi has created a prototype for a new audio system in the Audi Q7.  The Audi Sound Concept project has a whopping 62 speakers placed all around the full-size SUV.

The speakers include five tweeters, of which three are placed at the base of the windshield, 52 mid-range drivers placed in a 360-degree configuration around the cabin, four door-mounted woofers, and one large, roughly 12-inch subwoofer in the boot.  The system is inspired by the Linden Lichtspiele cinema in Ilmenau, Germany.  The theatre uses 192 speakers, and was designed around the concept "that a sound wave can be recreated by a multiplicity of small sound sources placed closely adjacent to one another along the wave front," according to a press release.

The result is perfect sound no matter where you are sitting in either the theatre or the SUV, and a system capable of playing 32 separate audio tracks simultaneously.  "There are no corresponding audio media available on the market because there are no playback devices, either," says Audi infotainment engineer Peter Gleim.  "A few film studios are already producing films with the method."

However, there is a drawback: because of the massive amplifier in the trunk of the vehicle, there is no room left for cargo.  Aside from the amp, there are three computers and a host of cables in boot.

Development of the system took place in both the €100,000 listening facility and the €10 million audio lab at Audi HQ in Ingolstadt.  "As far as we know, none of our competitors have such a facility," said engineer Wolfram Jähn.  "The listening room is our acoustic magnifying glass where we check what really is on a CD or DVD. This is important because your ears quickly get used to a sound and sometimes interpret errors as interesting effects. We test our sample speakers blind. We can compare them to the optimum and reset our ears."

You can find out much more about the technical details of the Audi Sound Concept in the press release below.