Ford Ka+ Gets A Splash Of Color In Europe 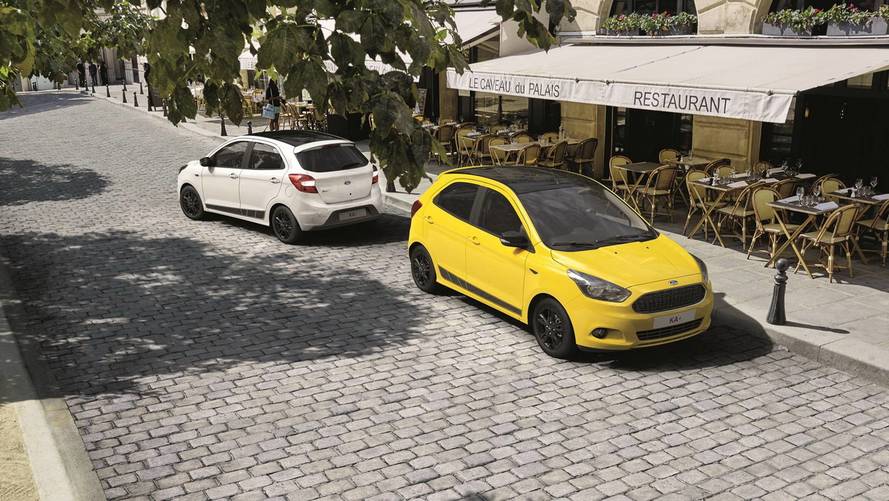 The Indian-built affordable little hatchback can now be had in new color combinations.

It was back in 1909 when Henry Ford said the company’s customers could get the iconic Model T in “any color so long as it is black,” but you can imagine a lot of things have changed since then. Case in point, even the cheapest model the Blue Oval is selling in Europe nowadays can be had in a multitude of hues and now it’s being given the special edition treatment bringing additional customization options.

Suitably called the “Color Edition,” the latest version of the Ka+ is being offered in six colors: Bright Yellow, Ruby Red, Smoke, Sparkling Gold, Moondust Silver, and Oxford White. Regardless of choice, the Ka+ comes with an assortment of black styling accents that have been applied onto the front mesh grille, side decals, mirror caps, roof, fender badges, and the 15-inch alloy wheels. Rounding off the changes is a slightly bigger roof-mounted rear spoiler.

Built in India and shipped to Europe, the Ka+ may be small on the outside, but the interior is roomy enough for up to five people. In fact, Ford says its city car has the best headroom and rear legroom in its class, along with no less than 21 stowage areas. It’s more sophisticated than the Figo sold in India as many efforts have been made to better suit the more demanding European tastes. Some relevant examples of the changes it has gone through for the old continent include the upgraded suspension, optimized steering, new front anti-roll bar, revised rear torsion beam axle, and new engine mounts.

Speaking of which, this particular Color Edition is available exclusively with the 85-horsepower version of the naturally aspirated 1.2-liter Duratec four-cylinder gasoline engine. As a side note, the regular Ka+ can also be had in a lesser configuration with the same engine dialed to a puny 70 hp. In both cases, output is channeled to the front wheels via a five-speed manual gearbox to keep it simple and cheap.

Ford is already taking orders for the new Ka+ Color Edition in Europe.

The interior has space for five passengers with class-leading front headroom and rear legroom, plus 21 stowage locations. A MyFord Dock in the centre of the instrument panel enables occupants to store, mount and charge mobile devices such as phones and navigation systems.