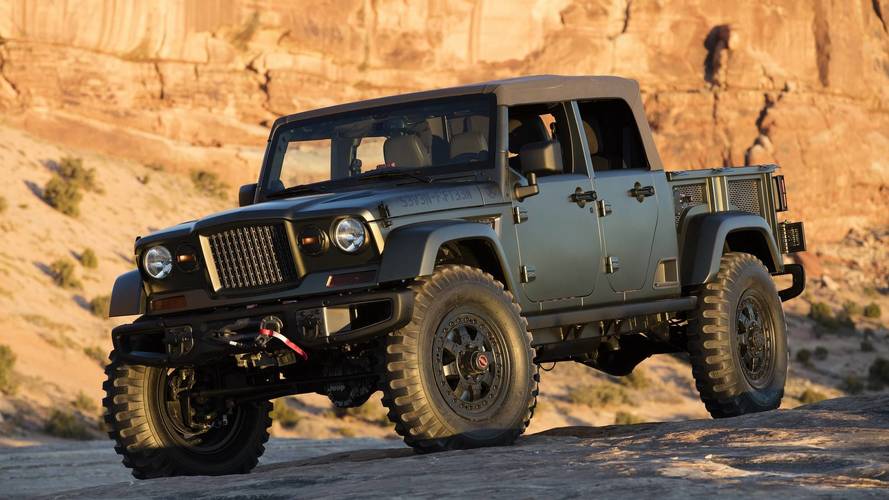 Production of the Wrangler-based pickup truck is slated to start in about a year from now.

At last year’s Moab Easter Jeep Safari, Jeep introduced the rugged Crew Chief 715 concept based on the previous-generation Wrangler Unlimited. It took the shape of a pickup truck with a fabric roof and an assortment of design cues paying tribute to a variety of Jeep military vehicles including the Kaiser M715.

If you’re a fan of the Crew Chief 715, you’ll be happy to hear the long-awaited Wrangler pickup truck codenamed “JT” will draw inspiration from last year’s concept. Sources close to Jeep have told Automotive News the utilitarian vehicle will be offered with an optional soft top, much like the regular Wrangler. Not only that, but owners will be able to lower it or remove it completely.

Some of the styling traits seen on the Crew Chief 715 will allegedly rub off on the Scrambler (name not confirmed), but not the front grille as that will stay true to the Wrangler’s heritage.

Jeep has plans to fully reveal the two-door Wrangler and the four-door Wrangler Unlimited next week at the Los Angeles Auto Show. The pickup truck won’t be there as it will debut at some point next year, with production at FCA’s Toledo Assembly Plant slated to commence in November 2018.

Numerous spy images have shown the testing phase is already well underway as the model has been in development for a number of years. Having seen the regular Wranglers out in the open, we’re not expecting any surprises when it comes down to the design of the pickup version. When it will eventually arrive, the Scrambler could feature a turbodiesel 3.0-liter V6 joining the turbocharged 2.0-liter four-cylinder and the naturally aspirated Pentastar V6 gasoline engines.