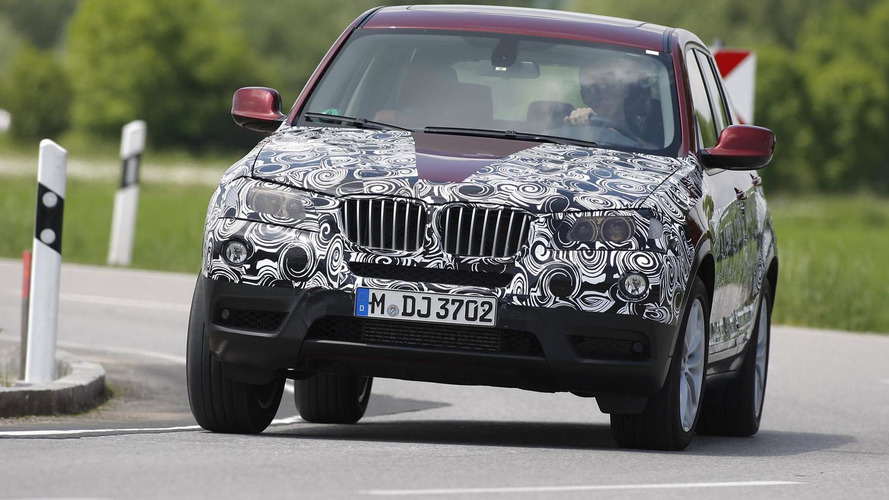 Check out this massive collection of photos featuring the 2011 BMW X3, inside.

BMW has officially released 188 photos of the still-camouflaged 2011 BMW X3. The second-generation compact crossover looks to be riding closer to the ground than the current model, with several other modifications in store.

Amongst these are the new front fascia, including a three-section front bumper, redesigned headlights, and a larger signature BMW kidney grille. Side mirrors have also been reshaped, as have the side sills. The new model looks to make use of a fully reshaped back end, that is not nearly as stocky as the first-gen SUV. Instead, it is rounder, with less harsh edges around the rear glass, and a rear bumper that is smooth, rather than boxy.

First-ever interior photos show the crossover with very adjustable leather seats with visible stitching. The stitched leather is also used at other points on the interior, including the center armrest and door inserts. The next-gen 2011 BMW X3 will go on sale by the end of the year, and is expected to be wider, longer, and taller than the current vehicle while also riding on a longer wheelbase. This will provide extra room for both passengers and luggage. Despite the bigger size, the new model is expected to weigh up to 25 kilograms (55 lbs) less than the current model.

More official details about the 2011 BMW X3 should drop before the unveiling in Paris in September. Until then, enjoy the photos!