All that's missing is the Gulf logo.

With its low-slung curvaceous body featuring wide hips and an imposing front grille flanked by large air vents, the Mercedes-AMG GT S isn’t exactly the most subtle car out there when it comes down to the exterior design. But some people will always want more in order to stand out from the crowd and for them it looks like Starke USA is the go-to place. 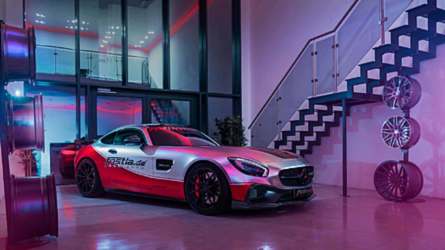 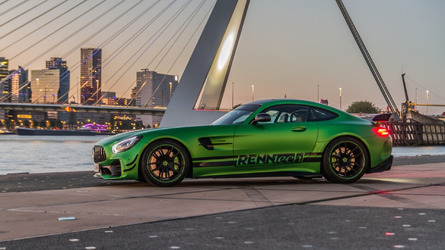 After making an appearance earlier this year at the New York Auto Show, the Mercedes-AMG GT RS by Starke USA as it’s known by its full name was spotted recently at a car meet in the United States. It comes as no surprise that it immediately managed to catch the attention mainly due to its extra wide body wearing a Gulf-like livery.

The high-performance coupe rode on 20-inch carbon fiber wheels and was basically glued to the road thanks to the adjustable KW suspension that was likely set up to the lowest possible configuration. Numerous other carbon fiber bits and pieces can be seen all over the car, including a front spoiler lip, side skirts, and a massive rear diffuser that extends onto the sides (and collects a lot of debris as shown in the video).

It’s all show without any extra go as the tuner hasn’t fiddled with the biturbo 4.0-liter V8, which in the 2018MY GT S pushes out 515 horsepower and 494 pound-feet of torque or 12 hp and 15 lb-ft more than before. For those finding hard to quench their thirst for power, Mercedes-AMG is also selling a 550-hp GT C version and the 577-hp GT R, with a Black Series version likely on the agenda bringing quite possibly even more AMG muscle.

Getting back to the car at hand, you’ll have to give Starke USA a call to find out how much the package costs, but you can imagine this level of customization doesn’t come cheap.