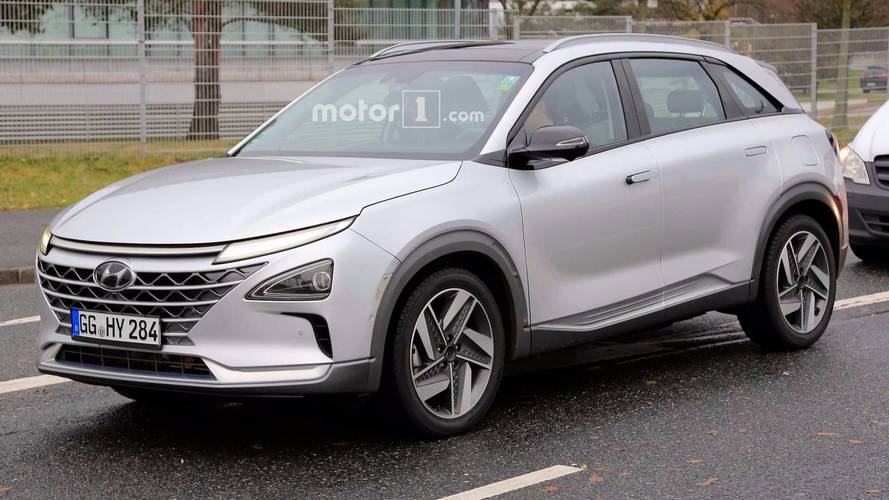 The new model will be officially unveiled in January at CES 2018.

As electric cars continue to evolve, automakers are also going deeper into the realm of hydrogen fuel cell vehicles. A concept version of Hyundai’s latest creation called the FCEV was actually shown to the world back in August during a special preview event in Seoul, with an official launch slated for January during CES 2018 in Las Vegas. Now, spy photographers have caught what are reportedly production versions of the new SUV outside the Hyundai Motor Euorpe Technical Center in Germany.

The as-yet unnamed SUV is said to have a system efficiency level of 60 percent, which is a 9 percent improvement from the first-generation ix35 fuel cell vehicle, better known in the U.S. as the Hyundai Tucson FCEV. The new vehicle is targeting a 580-kilometer (360-mile) range between stops for hydrogen, which is also a marked improvement from the Tucson. Available power is up as well, with 163 horsepower on tap.

Hydrogen fuel-cell vehicles utilize electric motors, however the juice comes from the fuel cell instead of batteries. The biggest advantage is of course refill time, which is pretty much the same as stopping off to fill up the gas tank on a regular car. Filling hydrogen isn’t quite as simple, however, since it requires higher pressures and secure connections between vehicles and the pump. In addition, the infrastructure for hydrogen has been very slow to develop, despite fuel cell cars being on the road – albeit in very limited numbers – for several years now.

Hyundai is shooting to have 10,000 fuel cell vehicles on the road in South Korea by 2020, an endeavor which will hinge heavily on the country increasing its hydrogen filling stations from 20 to 100 by then. Similar expansion will be necessary in the U.S. if automakers hope to expand on fuel cell sales, as there are currently only 39 hydrogen stations in the entire country, with the vast majority located in California.