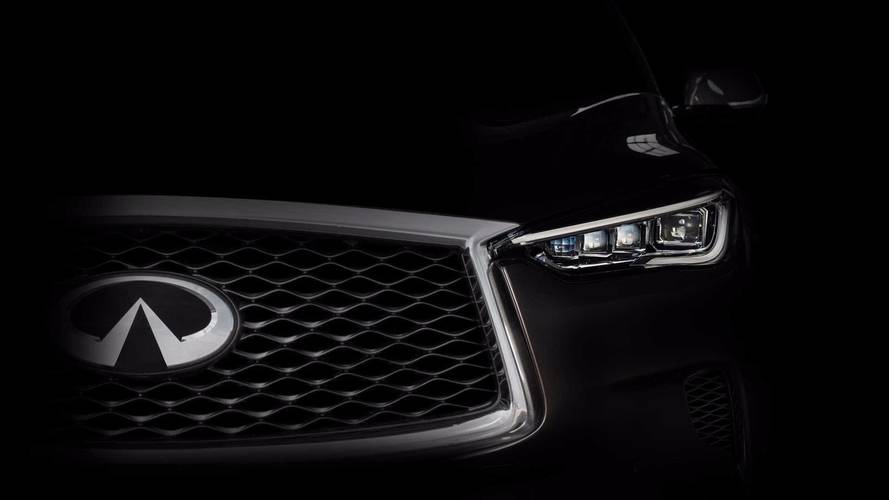 The L.A. Auto Show is just over a week away, and Infiniti is hoping to make some waves with a new vehicle debut that it says will have “world-first technologies,” among other things. To add some fuel to the fire, the automaker dropped a teaser photo showing half the front end of something that’s obviously wearing Infiniti’s current grille and headlight design. The million-dollar question, of course, is what exactly is it?

The most obvious answer would be the new QX50, a machine we’ve occasionally seen this year in spy photos and something that Infiniti sorely needs to compete in the compact crossover segment against the Audi Q5, BMW X3, and the Lexus RX. Even with an abundance of camouflage we can see a very close resemblance to the teaser pic – the headlights and grille look to be a veritable match, not to mention the massive Infiniti badge.

It could also fit the whole world-first technology thing, as the QX50 is rumored to have the company’s new variable compression-ratio engine. Displacing 2.0 liters and fitted with a turbocharger, the mill can produce 268 horsepower while varying its compression ratio between 8:1 and 14:1. The major advantage with such a design is that it can provide more performance with higher compression, while offering better fuel economy at lower compression.

The stars certainly seem to fall on this teaser being for the QX50, but what if it’s something else? A couple weeks ago Infiniti offered up another teaser for L.A. in a sketch of something that looked more like a svelte wagon as opposed to a crossover. It could be that the automaker is planning to reveal a concept for a future model, but with a new flagship sedan concept already confirmed for Detroit just a month after L.A., it seems unlikely. And actually, the more we look at that teaser sketch, the more it looks like the profile of a sleeker crossover.

We will know for sure in less than a week. Infiniti plans to debut this new vehicle on November 28 in Los Angeles, just prior to the show.

"As with all INFINITIs, we have been inspired by our desire to drive, expressed with power and artistry. With this all-new model, inspiration comes from striking the perfect balance between lust and logic. At a glance, seamless and sculptural, getting closer to the car reveals an ingenious blend of proportion and space."

The all-new INFINITI will be revealed in Los Angeles on November 28 at 5 p.m.