The Polo-based model will arrive in 2018 to continue the SUV onslaught.

For a company as big as Volkswagen, the number of available SUVs was very low until not too long ago as the folks from Wolfsburg only had the Tiguan and Touareg. In recent times, the portfolio of high-riding vehicles has grown to include the large Atlas, the three-row Tiguan Allspace, and the Golf-based T-Roc. The proliferation of SUVs will continue in 2018 when the T-Cross is going to be unveiled as a crossover counterpart of the latest Polo supermini. 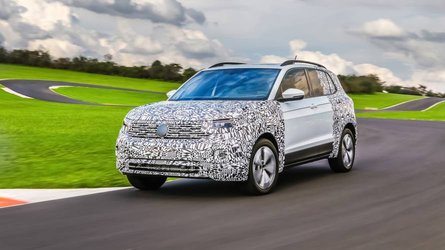 Previewed by a droptop concept (pictured here) in March 2016 during the Geneva Motor Show, the T-Cross will gain a fixed metal roof for the production version rumored to have a wheelbase stretching at 2560 millimeters (100.7 inches) or 30 mm (1.18 in.) shorter than the T-Roc’s. At the same time, the distance between the axles will be 12 mm (0.47 in.) longer when compared to the Polo and that should pay dividends in terms of rear legroom.

In typical VW fashion, the exterior styling will be conservative, although a company insider has told Auto Express the smallest SUV in the lineup will look “very sporty” and “you will wonder whether it’s a VW at all.” The same person went on to specify the front grille will be familiar to VW fans, but the T-Cross will be “very exciting design elsewhere.”

Riding on the same MQB A0 platform as the Polo, the new T-Cross will be a sister model of the SEAT Arona. An optional all-wheel-drive layout will be available on the higher-spec models with the four-cylinder engines, while the cheaper ones will use the familiar three-cylinder 1.0 TSI sending power to the front axle.

Following the T-Cross’ launch in 2018, VW will then gear up to introduce yet another SUV, the pint-sized Taigun. First shown as a concept back in 2014, the up!-based model is allegedly back on the agenda and is expected to come out around the end of the decade with the T-Track moniker.