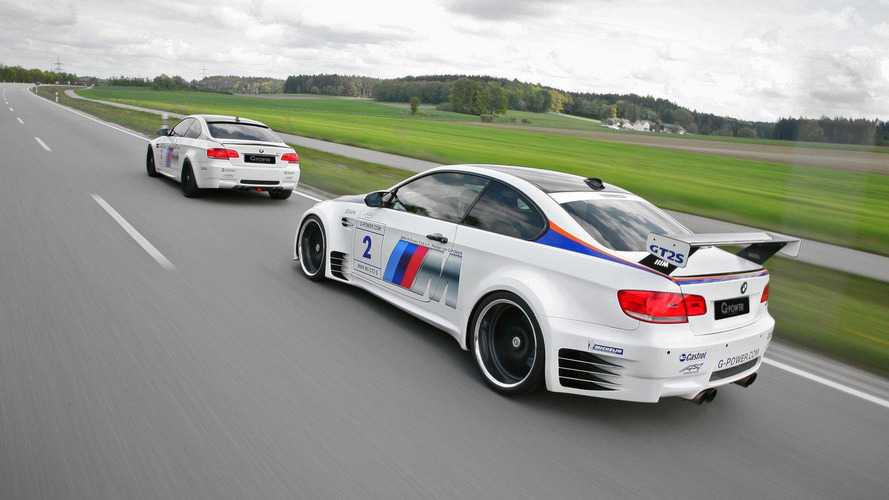 Check out these pics, and the full specs, of two mean new M3 models from the tuners at G-Power. Both pay homage to the BMW Motorsports team victory at Nurburgring earlier in May.

Engineers at German tuning firm G-Power have rolled out two vehicles to honor the BMW Motorsport team for their win at the 2010 24 Hours of Nurburgring endurance race.  The G-Power M3 GT2 S targets BMW lovers "looking for a vehicle along the lines of the Porsche 911 GT3 RS," while the G-Power M3 Tornado CS is the "civilian version" of the same car, according to a press release from the company.

Both cars are street legal, and both are focused around the €10,800 (excl. tax) SK II CS supercharger upgrade, which includes the same compressor as the Alpina B6 GT3, as well as an aluminum airbox,  aluminum charge air cooler, and dual flow carbon intake.  Meanwhile, a titanium exhaust reduces weight by 26 kilograms.

Where the two cars differ substantially is in weight.  The GT2 S uses a full carbon-fiber body kit, with replacement parts at the front skirt, each of the wings, and the rear end.  The front and lip spoilers are also made from the lightweight material.  In total, the M3 GT2 S weighs 150 kg less, despite having the same power output as the Tornado CS.

This allows the GT2 S to sprint from a standstill to 100 km/h in 4.1 seconds, 0.2 seconds faster than the Tornado CS.  0-200 km/h for the GT2 S was not revealed, but its sister model hits that mark in 11.8 seconds.  Keeping the Tornado CS on the road are forged Silverstone ClubSport wrapped in Michelin Pilot Sport tires.  The 20-inch wheels measure nine-inches wide at the front, and 10.5-inches at the rear.  The GT2 S uses Michelin Pilot Sport Cup tires wrapped around three-piece Silverstone RS wheels measuring 9x20 front and 11.5 rear.

The full price on the G-Power M3 GT2 S begins at €139,495, exclusive of taxes and paperwork.  The retail price of the G-Power M3 Tornado CS shown in the photos was not disclosed.