It can go 21 miles purely on electric power and can travel over 500 miles.

Ford electrifies the market for police, fire, and government vehicles with the launch of a specially outfitted version of the plug-in hybrid Fusion Energi that it calls the Special Service Plug-In Hybrid Sedan. The model isn't suitable for pursuits, but the four-door can cover over 500 miles (805 kilometers), including 21 miles (34 km) solely on electric power. The Blue Oval thinks the setup would be perfect for officials like detectives or police and fire chiefs. Sales begin in December, and deliveries start in summer 2018. 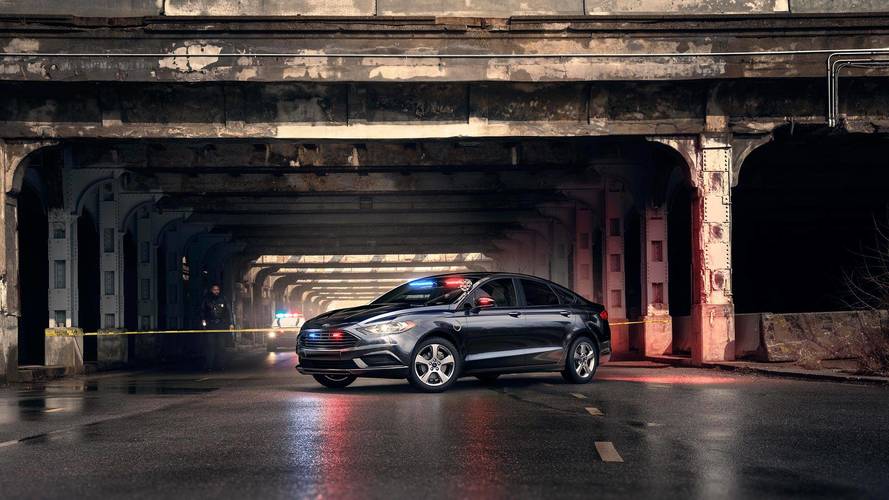 Like the standard Fusion Energi, the Special Service Plug-In Hybrid Sedan features a 7.6-kilowatt-hour lithium-ion battery. It requires two-and-a-half hours to charge on a level-two, 240-volt charger or 7 hours from a conventional 110-volt outlet.

“This is the first Ford police vehicle that can potentially get through an entire shift using no gasoline whatsoever,” Stephen Tyler, Ford police brand marketing manager, said in the model's announcement. “Anyone can plug this in to any wall outlet to run gas- and emissions-free on battery-only operation.”

The sedan comes standard with police-centric equipment. For example, the heavy-duty cloth seats have smaller side bolsters for improved comfort of officers wearing lots of equipment, and anti-stab plates increases their protection. Vinyl rear seats and floors are easy to clean. Plus, there are extra mounting points around the cabin and red and white task lights in the overhead console.

Customers can also order a variety of optional equipment for law enforcement work, including several emergency lighting packages. A dark-car system shuts off the interior lights and dims the instrument cluster for surveillance.

DEARBORN, Mich., Nov. 20, 2017 – Earlier this year, Ford revealed the world’s first-ever pursuit-rated hybrid police vehicle. Today, the company is giving law enforcement an even more efficient option with the reveal of a plug-in hybrid vehicle capable of driving up to 21 miles without a drop of gas.

The Special Service Plug-In Hybrid Sedan, the first plug-in hybrid police vehicle from Ford, is designed for police and fire chiefs, detectives, and other government personnel whose jobs don’t require a pursuit-rated vehicle.

“This is the first Ford police vehicle that can potentially get through an entire shift using no gasoline whatsoever,” said Stephen Tyler, Ford police brand marketing manager. “Anyone can plug this in to any wall outlet to run gas- and emissions-free on battery-only operation.”

The vehicle’s 3.3-kilowatt onboard charger allows agencies to fully charge the 7.6-kilowatt-hour battery in just 2.5 hours on a 240-volt, level-two charger. But Ford is confident most agencies won’t need anything more than a regular 120-volt wall outlet to recharge. The lithium-ion battery can move the vehicle up to 21 miles on a single charge and up to 85 mph on battery power alone. Once the battery runs down, the vehicle is powered by its gasoline-electric hybrid powerplant – with a range surpassing 500 miles – eliminating any concerns of range anxiety typically associated with battery-only electrics.

Several unique options are available for the Special Service Plug-In Hybrid Sedan, including a driver spot lamp, a trunk storage vault, trunk ventilation system, and a rear door control-disabling feature. A special dark-car feature turns off interior lighting and allows the dash cluster to be dimmed 100 percent for surveillance, and several emergency lighting packages like those found on other Ford police vehicles are also available.

Customers will be able to order the Special Service Plug-In Hybrid Sedan in December with sales starting next summer.