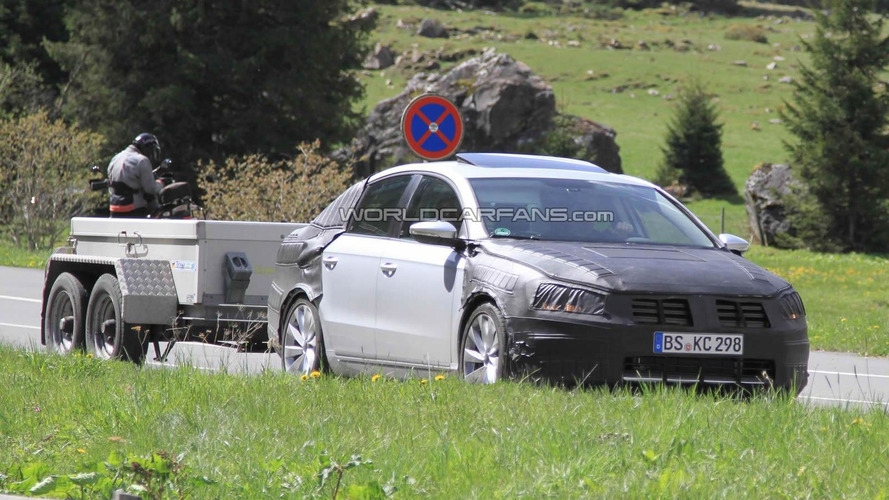 Nine spy pics of the 2012 Volkswagen Passat has us hopeful that VW has done away with the boring design of the last model. The story inside.

These first photos of the next generation 2012 Volkswagen Passat sedan prototype were caught by spies hiding out in the mountains of Europe.  The field photographer noted that the new car looks to be much wider than the current model, and at the same time looks to have a longer wheelbase.

This can be seen, in part, at the side windows where the front occupants appears to have much lengthier windows than before.  The greater dimensions will translate to a roomier cabin, giving more legroom and space between passengers.  Despite the possible larger size, do not expect much in the line of a weight increase.  Reports have surfaced that the automaker will build the Passat with foam reinforcement and ultra-thin glass to save weight.

Significant padding at the front and back makes us cautiously optimistic that the automaker is building a more dynamic look into the new Passat, hopefully letting us forget about the dull look of the current B6 version.  Look for petrol and diesel models to max out from 280-300 hp (209-224 kW), with a BlueMotion-badged hybrid model also in the works.

Features on the car could include airless tires, though that is not the case with this prototype.  Other equipment suspected to be present on the production model includes 4Motion AWD, all-angle parking cameras, and a wiperless windscreen system.

Check out the pics and let us know what you think of this car.  Will it be a hit?