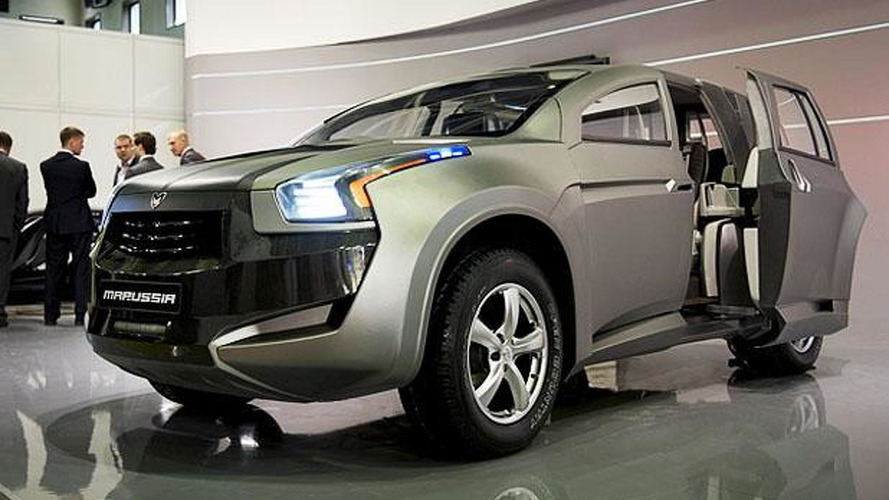 Find out more about this beast, the Marussia F2, fit for fleet service, but maybe too ugly for the normal roads.

Russian manufacturer Marussia Motors shocked the CSTB media conference in Moscow yesterday with the introduction of a new SUV.  The bulky Marussia F2 was shown off to the public for the first time, and is meant to be a multipurpose vehicle capable of use in any weather situation.

As a company better known for the B1 and B2 supercars, it was more than surprising that the automaker would create a "Russian car class SUV" meant to be used not only for individuals, but also as a fleet vehicle.  The versatile SUV has been designed for use by first responders in emergency situations, a mobile command center, and military use.  It has a customizable interior design to better accommodate F2's expected wide-ranging customer base.

However, despite the "utilitarian" design, a number of interior features are sure to attract individuals.  Items like the safety-latched switches, turbine-shaped air vents, and flat panel monitors will lure many.

Unfortunately, the vehicle has a face only a mother could love, though many mothers wouldn't.  Its styling is overdone, to say the least, with a back end as ugly as that of the Buick Rendevous.

The Marussia F2 was at the media conference to show off its multimedia system that is sold standard on all their vehicles.  The infotainment unit has functionality that accommodates GPS, television programming, Bluetooth, and Skype.  Marussia's SUV will be on display at CSTB-2010 until May 14.