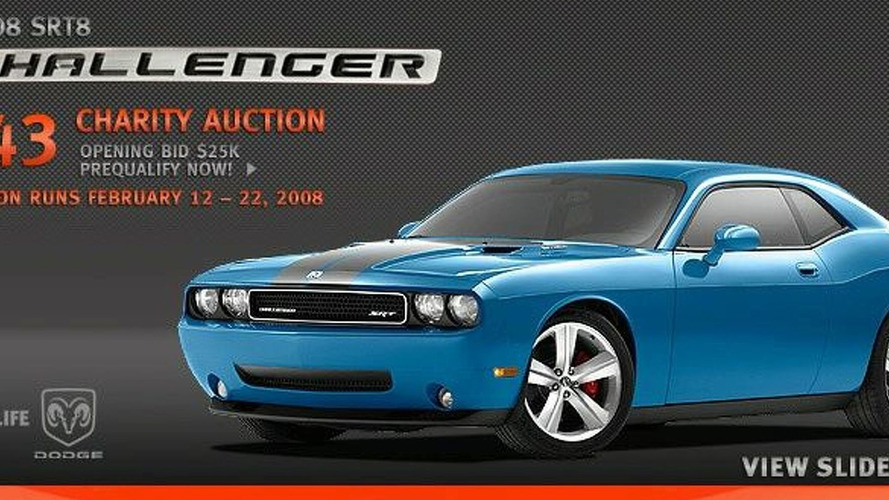 Special color 2008 Dodge Challenger SRT-8 #43 is being auctioned off to the Highest bidder, whose bid now sits at USD55,000.

A bidding war has begun on eBay where the big prize is a 2008 Dodge Challenger SRT-8. While this in itself may not sound too exciting, the goose bumps come in when you hear that of all the Challengers about to flood the market, only one will be dressed in B5 Blue, the colour in which some of the original 1970 models came in.

This one-of-a-kind Challenger SRT-8 features black hood stripes, under which is a 6.1-litre V8 HEMI engine mated to a 5-speed automatic transmission. The 1970 models featured a 3-speed gearbox. Current SRT-8 engines kick out 425 bhp/ 317kW and 569Nm of torque.

An entire package of goodies awaits the winning bidder, whose money will proceed to the Victory Junction Gang which is an organization dedicated to enriching the lives of children with chronic illnesses. There are VIP passes into the Dodge Challenger 500 NASCAR race at the Darlington Raceway in South Carolina, return flights and accommodation for two in addition. Plus you get to meet Kyle Petty who founded Victory Junction Gang.

Things appear to favour the auction route when it comes to Dodge and the new Challenger (see Related Stories). While charities will be smiling periodically because of this, questions may be asked as to why such an iconic brand as Challenger is constantly being sold off at auctions.