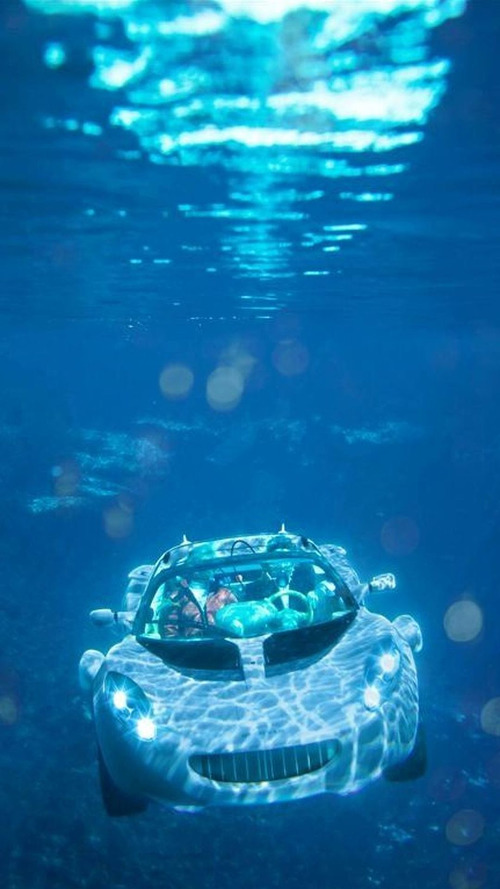 Frank M. Rinderknecht, the founder of Rinspeed, considers himself a dreamer, as anyone can say by visiting his companyâ€™s official website. And not only because he quotes two very famous sentences about dreams (one from John Lennon, in â€œImagineâ€, and the other from Walt Disney), both placed right below his picture, but also due to the cars he has managed to create. Anyway, one of his most extreme dreams, and the one that could have turned into a real nightmare, was announced in December, 2007. Rinspeed would build the first submersible car of the world. Topping this, it would be an electric vehicle. And a roadster. Well, it seems the dream came true. And it is called sQuba.

This amazing machine is 3.79 m long, 1.94 m wide and 1.12 m tall, with a wheelbase of 2,30 m. Although it really resembles the Lotus Elise, it is not even close to the British car in what relates to performance. Its electric engine, which delivers 54 kW (73 bhp) at 4,500 rpm and a torque of 160 Nm at 1,500 rpm, pushes it to 80km/h in 7.1 s and to a maximum speed of 120 km/h, the legal limit in many countries. There is no word on the carsâ€™ autonomy, but it uses lithium-ion batteries. Their charge usually lasts more than regular batteriesâ€™, and the sQubaâ€™s weight, only about 920 kg, will help them keep going a little further.

Performance may indeed not be the expected by the looks, but the dynamics the car will attract attention for are presented in the water. The sQuba can flow and navigate through two back propellers (also electric) or submerge and also be driven, under a maximum depth of 10 m, with the help of two Seabob jet drives, responsible for keeping the car stable under water. The speed over the water is 6 km/h. Under it, it falls to half the speed, 3 km/h.

The choice for a roadster, which made Rinspeed adopt oxygen cylinders in the car for his driver and passenger to breathe, has a simple and logical explanation: if the car was a hardtop, all the cabin would have to be really strong to cope with the water pressure. This would add lots of extra weight to the car and it would move very slowly out of the water as well. By the way, the sQuba is a rear-wheel drive vehicle. And will not be for sale, what makes it a one-of-a-kind first electric submersible car. Some dreams cannot be shared at all.