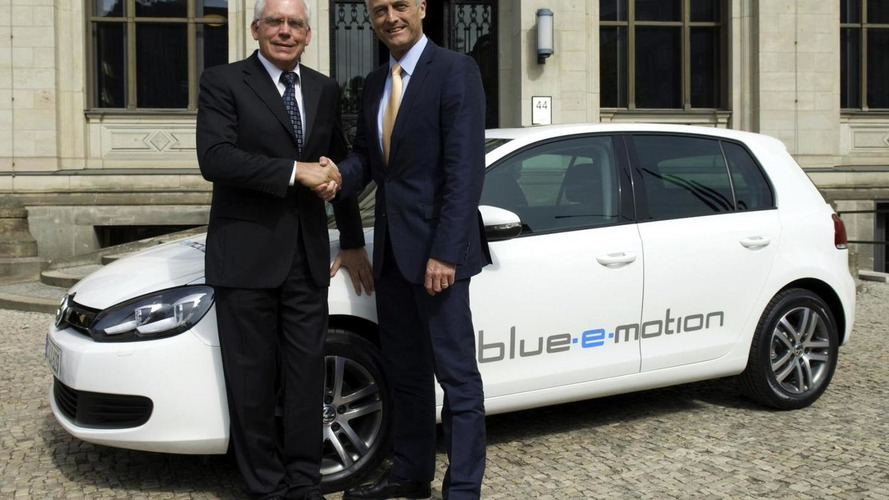 All-electric Golf set for production in 2013. VW will also be introducing blue-e-motion variants of the Up and Jetta models.

Volkswagen has unveiled the Golf blue-e-motion concept car in a ceremonial presentation today for the German Chancellor Dr. Angela Merkel.

The all-electric Golf blue-e-motion features an electric motor with 85 kW /115 PS under the bonnet powered by lithium-ion batteries. The electric motor provides an instant torque of 270 Nm (199 lb-ft), right from the go, while the batteries allow for a range of up to 150 km (93 mi). Top speed for the electric Golf is a respectable 140 km/h (87 mph).

VW will be manufacturing a fleet of 500 Golf blue e-motion models for testing next year. The Wolfsburg-based automaker plans on taking the car to production in 2013, after the debut of the VW Up blue-e-motion. Volkswagen is also planning on a Jetta blue-e-motion to be introduced that same year.

The German federal government has a goal of putting one million electric vehicles on the roads by 2020. VW hopes to be the main supplier of those cars.

But the automaker wants to make clear that its not only the car industry that is responsible for reducing emissions.

"Future electric cars give us enormous opportunities for reshaping mobility to be even more sustainable...[but] the federal government must ensure that eco-friendly energy sources are utilised. Only then will we experience a genuine transition to a new era," said Dr. Martin Winterkorn, Chairman of VW, in the press release.