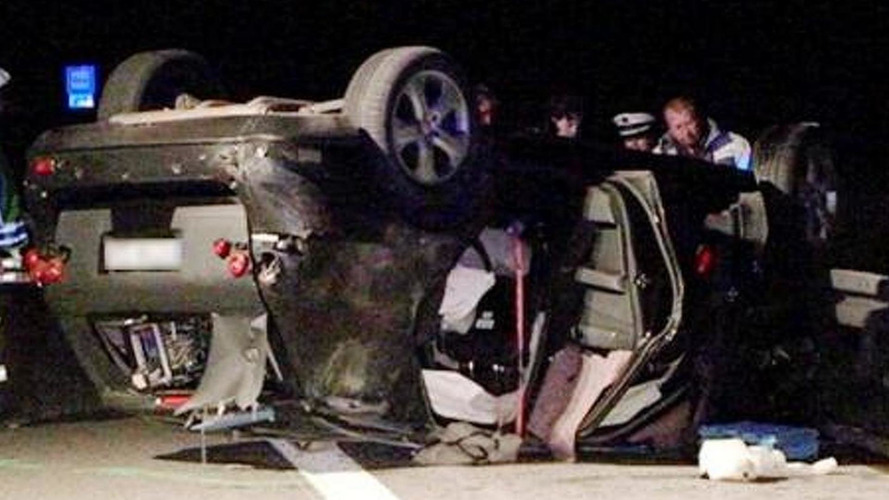 One person is dead and two are injured following a high-speed crash involving a Mercedes test vehicle on the autobahn. The story inside.

One man was killed and a Daimler test driver was injured in an accident on Autobahn A81 near Rottweil, Germany.  In the early morning hours of the April 23 the 52-year-old Daimler employee was testing a 2012 Mercedes-Benz M-Class prototype SUV when he struck a 26-year-old man exiting his vehicle.

Moments before, the younger man had a problem with his vehicle that led to a minor collision with a guard rail on the left side median.  Two other motorists, aged 29 and 57, stopped to assist the man when the M-Class approached at a high rate of speed.  Apparently not seeing the accident site, the Daimler driver crashed into the other vehicle as the 26-year-old was emerging from his own car.

The test driver's vehicle flipped over, and travelled an additional 250 feet before coming to rest on its roof.  Emergency responders transported the test driver to the hospital with serious injuries.

Neither of the two good samaritans required treatment in a hospital, as both managed to jump over the guard rail to safety.  Only the 57-year-old received minor injuries, likely from the fall.  A video of the accident shows damage to a third car, possibly the vehicle driven by the roadside assistants.

The crash took place on a stretch of A81 that connects Singen and Stuttgart, where Mercedes-Benz and Porsche prototypes are often tested under the cover of darkness.  There is no posted speed limit on that stretch of motorway.

Police have not yet determined the responsible party, and the cause of the accident is still under investigation.  Property damage at the scene was estimated at €80,000.