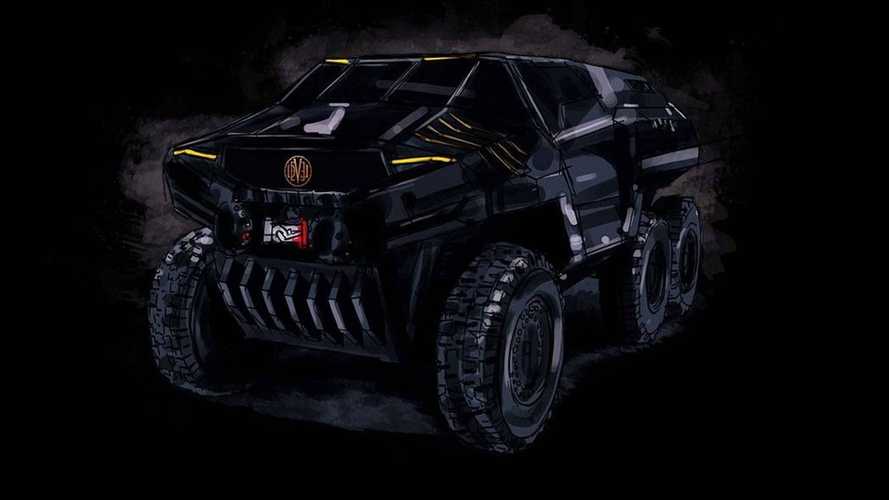 It can drive over anything that isn't already scared enough to run away.

A few days ago we took a look at the Devel Sixteen, a crazy concept hypercar with a 5,000-horsepower V16 engine that the company brought to the Dubai Auto Show. Also attending the event in Devel’s display was an equally bonkers 6x6 monstrosity called the Devel Sixty, complete with massive tires, an abundance of black paint, and a front end that bears an uncanny resemblance to Darth Vader.

Very little is known about this machine, other than it’s a prototype large enough to create it’s own gravity well, sucking in subcompacts that happen to get too close. Devel’s website features a rendering of the Sixty with a simple “coming soon” tag, but Shmee150 on YouTube offers up a bit more info. It utilizes a suspension system that can be lowered to help it fit under low overhangs or in a garage, and it has a single door on the left side that opens up like a private jet for driver and passengers to enter.

As for power, one would expect the Sixty to house a version of the 12.3-liter V16 being developed for the company’s hypercar. Again, there’s no official word from Devel, but Shmee150 says it uses a relatively conventional-sounding 6.7-liter turbodiesel V8 producing 720 hp and 1,000 Nm of torque, which sounds a bit strange to us considering the torque figure converts to 737 pound-feet. That's a low number for such horsepower, but hey, such is life in the wonderful world of crazy prototype vehicles.

The Sixty naturally draws comparisons to the Mercedes-AMG G63 and Hennessey VelociRaptor, both of which are available with six wheels and an abundance of attitude. The difference, obviously, is that those vehicles are available for purchase, while the Sixty is only a concept at this point. Considering Devel’s Sixteen hypercar was unveiled four years ago and is still in concept form, we aren’t holding our breath on the Sixty being road-ready anytime soon. Should we be proven wrong, however, it would easily take the crown as the baddest machine on the block.

For what it’s worth, we hope we’re wrong.