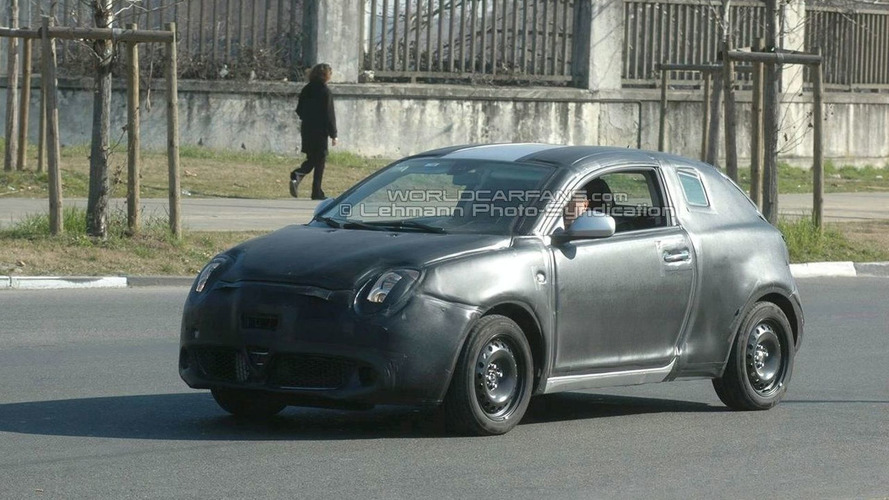 We've told you about the new car before, but now we finally have some honest-to-goodness spy pics of the Alfa Romeo Junior.

We've told you about the new car before, but now we finally have some honest-to-goodness spy pics of the Alfa Romeo Junior.  Spotted in Torino, the four-meter long two-door, the Junior should be available in October '08.  Alfa plans to produce roughly 75,000 units of the car, making it a full competitor to the new Audi A1 and the MINI.  Even the front headlights look close to those found on the first-gen MINI.

Based in part on the Fiat Punto, our earlier renderings show the new Junior looking much more attractive than its step-brother.  Engine choices will come from the higher level of the Punto options, with choices ranging from 120 horsepower on up to 200 hp.  Early rumors have also suggested a 1.8 liter turbo with 227 horsepower, with diesel options becoming available at some point.  At 22 centimeters shorter than the Alfa Romeo 147, the Junior could be a fantastic option for city-dwellers.  A convertible version may also get consideration.

Sadly, much of the styling is covered up by black tape and padding.  However, the distinct Alfa grille was not entirely disguised... leading us to speculate that Alfa Romeo is just about ready to let the world know about their new hot hatch.  Speculation has it that the Alfa Romeo Junior may get an unveiling at the Geneva Motor Show in two weeks.  If so, the focus on this car will quickly turn to its alleged €20,000 entry-level price tag, and whether the Italian automaker has priced this newcomer too high to legitimately compete with the MINI.

A typographical error accidentally identified this car as the 149 Junior.  The error was later corrected.