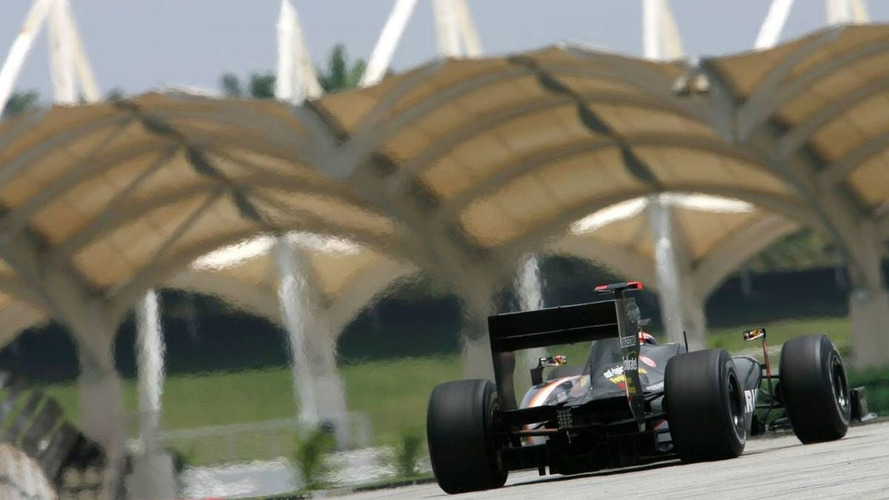 Renault's rookie Russian driver Vitaly Petrov is wearing a black armband this weekend, in the wake of the subway bombings in Moscow.

Renault's rookie Russian driver Vitaly Petrov is wearing a black armband this weekend, in the wake of the subway bombings in Moscow.

Lotus' technical boss Mike Gascoyne was presented with a cake at the Sepang circuit on Friday, as he is celebrating his 47th birthday on the initial day of practice for the Malaysian grand prix.

Jenson Button was drenched by the downpour late on Thursday afternoon at Sepang, as he was doing his circuit walk -- without an umbrella!

Toro Rosso marked April Fool's Day by issuing a press release about the conversion of its redundant fuel rigs into giant ice-cream dispensers. Nico Hulkenberg, meanwhile, posted a story on his official website about changing his name for marketing reasons to 'Nico Hulker'.

HRT is running a revised fuel tank system in Malaysia this weekend. "It prevents the movement of the fuel when accelerating and especially under braking," Bruno Senna told Brazil's Globo. "In Bahrain and Australia, it was like having a 150 kilo fat man dancing on the car at the start."

Reserve driver Nick Heidfeld has not had any laps in Mercedes' current F1 car, but he did get some time this week at the wheel of the marque's famous 1954 W196R during a street demonstration in Kuala Lumpur. Germany's Bild newspaper said the silver car is valued at EUR26 million.