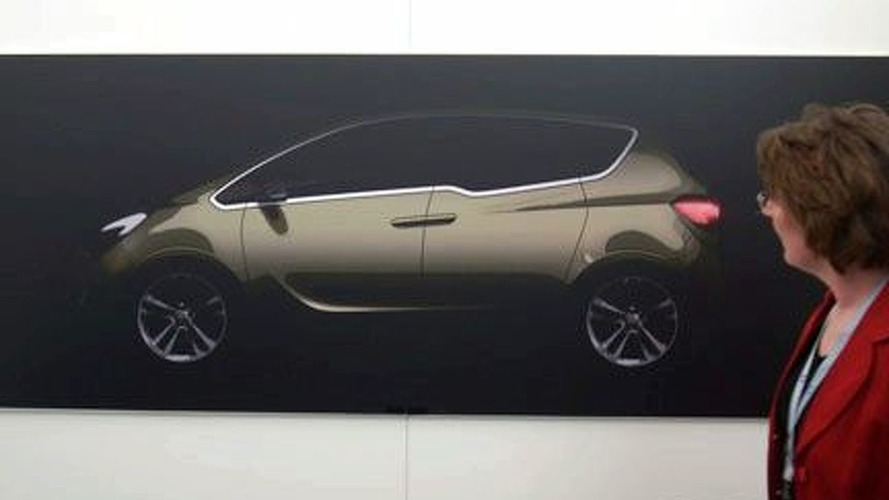 This lady seems to be awestruck with Opelâ€™s new Meriva concept design which will debut at Geneva 2008.

This is a glimpse of the new Opel Meriva concept which will make its debut at the Geneva motor show in March. The Meriva sits between the Corsa and the Astra in terms of size and can be best described as a mini MPV. The current car has been around since 2003 and shares much of its componentry with the Corsa and Astra.

The concept is expected to give a clear indication of what the production Meriva will feature and look like. First impressions are good, although it would not be hard to improve on the current cars rather slab sided look. Rumour has it that the concept will preview a “suicide door” system. This system is now coming back into fashion after decades of being neglected in favour of more conventional door access system. Suicide doors operate a normal front door which swings forward in an arc and is hinged to front A pillar. The rear doors swing rearwards in an arc from the cars C pillar. Generally the car will then do without a B pillar, so when both doors are open there is unimpeded access to the whole cockpit. However, previous spy shots have shown that Opel’s system may well use a B pillar. Opel refers to this door set-up as their FlexDoors system. Essentially it is similar to Mazda’s RX8 and Mazda’s B series pickups.

Expect the production version to carry over the Corsa’s drivetrain which means 1.3 to 1.7 litre diesels and 1.4 to 1.8 litre petrol’s.