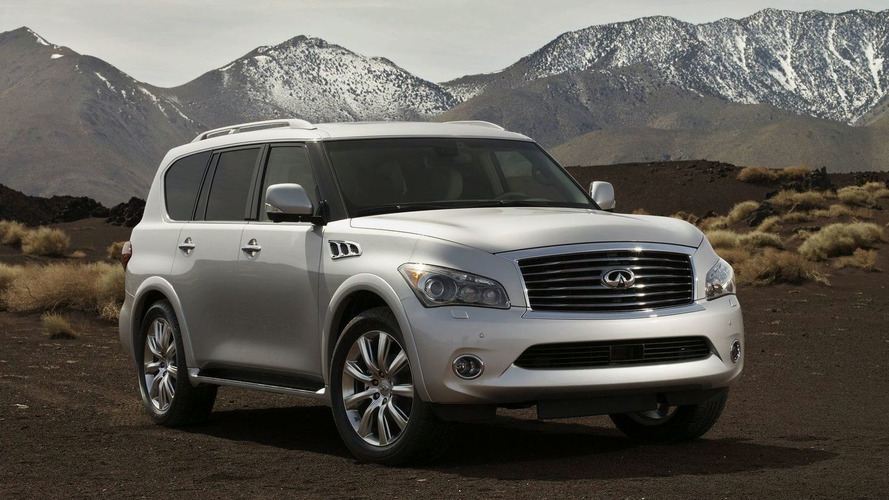 Infiniti has officially unveiled the all-new 2011 Infiniti QX56 luxury SUV at the 2010 New York Auto Show. We have all the important details and pictures.

The all-new 2011 Infiniti QX56 has come to life at the 2010 New York Auto Show. Completely redesigned from the platform up, the SUV boasts an array of features and technologies for improved safety, comfort and performance.

Two models will be available when it goes on sale in the US this summer. One is a QX56 2WD and the other a QX56 4WD. They share a 5.6-litre V8 engine with Direct Injection Gasoline (DIG) technology and a 7-speed automatic transmission. Maximum power is 298kW (400bhp / 406PS) and torque is 413 lb-ft (600Nm). Infiniti says a 10% improvement in fuel economy can be expected over the previous-generation vehicle.

Inside it a features a standard 7-passenger seating arrangement, or an 8-passenger system with the 2nd row 60/40-split folding bench seat. Front leather seats have a heating and cooling climate control function.

The list of creature comforts is quite extensive, so we will only mention a few. These include an 8-inch touch-screen display, Infiniti Hard Drive Navigation System with XM NavTraffic, Bluetooth connectivity, a Bose 13-speaker sound system and a single in-dash CD/DVD player with MP3 playback.