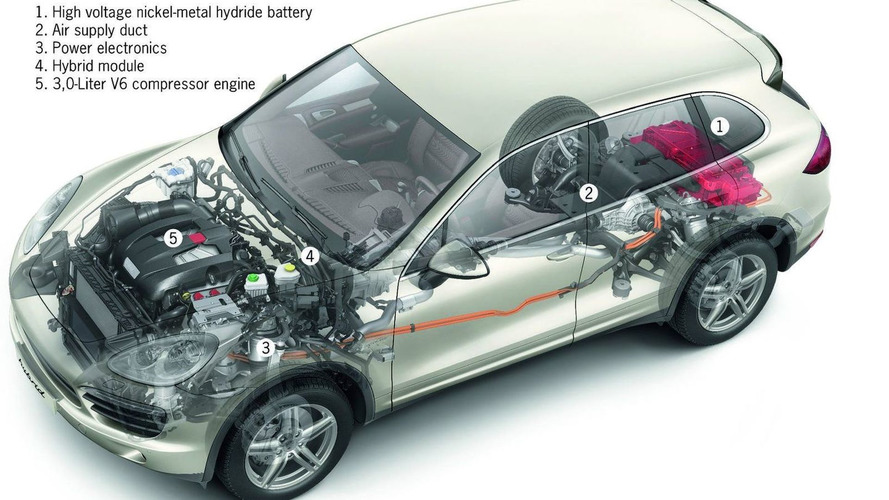 We have details, photos, and images of the Porsche Cayenne S Hybrid, set for a debut in New York next week.

Making their North American debut, Porsche will be bringing the highly-anticipated Porsche Cayenne S Hybrid to the New York Auto Show next week as well as Cayenne base model, Cayenne S and Cayenne Turbo.  The second generation Cayenne made its world debut at the Geneva Motor Show earlier this month.

The automaker will sell the Cayenne S and Turbo in the US this July, with Cayenne and Cayenne S Hybrid models hitting the market later in the year.

The hybrid version combines a supercharged 3.0-liter 333-horsepower (249 kW / 337 PS) V6 engine with a 47-horsepower (34 kW / 48 PS) electric motor.  Combined output is 380 hp (283 kW / 385 PS), with maximum torque of 428 ft-lb.  The engine and motor are mated to a decoupling clutch, with the SUV intelligently choosing between both driving modes.  Added to this, the vehicle can travel on all-electric up to 60 km/h (37.2 miles), with the electric motor providing a power burst during hard acceleration.

Weight reductions along the entire Cayenne line also lead to better fuel economy and reduced emissions.  We'll have more on the Porsche Cayenne S Hybrid when the vehicle is introduced in New York on March 31.