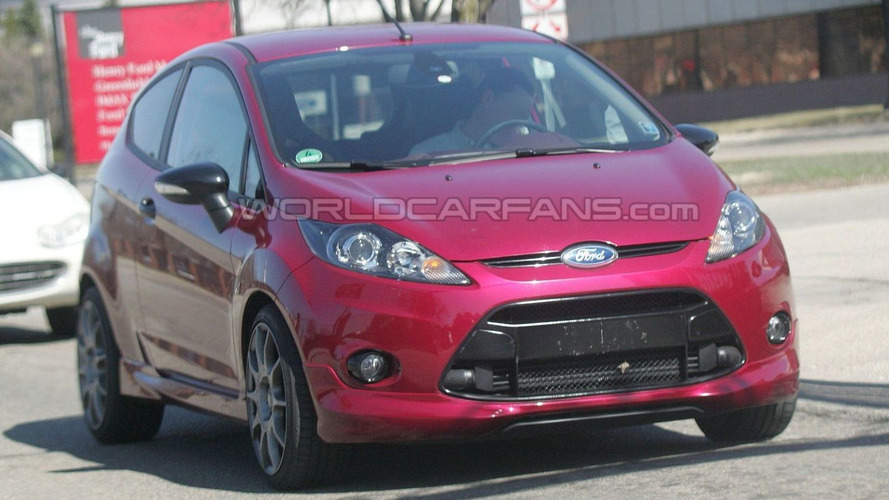 Modified Euro-spec Fiesta likely sporting a 1.6 liter turbocharged EcoBoost engine with around 170 bhp under the hood.

Here are some spy pics of a modified European-spec Ford Fiesta spotted prowling the streets of Dearborn, Michigan.

The North American market Fiesta is expected to get a hotter-hatch variant sometime next year and this could be a prototype for that model which Ford is testing.

The Fiesta mule seen here is a modified European-spec model fitted with Ford's Titanium trim level and with one of Ford's direct injection EcoBoost powerplants underneath the hood. Which one exactly, we don't know. But given that the last Euro-market Fiesta ST came with a 2.0 liter Duratec engine with 150 PS (110.3 kW / 147.9 bhp), we can expect Ford to plant a 1.6 liter turbo or, perhaps, even a 2.0 liter turbo into the tiny Fiesta from its EcoBoost range of engines and provide the hatch with a significant upgrade in power.

But the Fiesta, sporting Ford of Europe's 'kinetic design', will be a looker by its North American segment standards. Telltale signs include an intercooler mounted in the front lower bumper grille, rear diffuser, double exhaust pipes and 17-inch anthracite Speedline rims.

It could be that Ford is just grooming a groovy model to show off at the SEMA show in Las Vegas in November. Or maybe this is close to what will hit dealerships as the hottest Ford Fiesta around sometime in 2011.