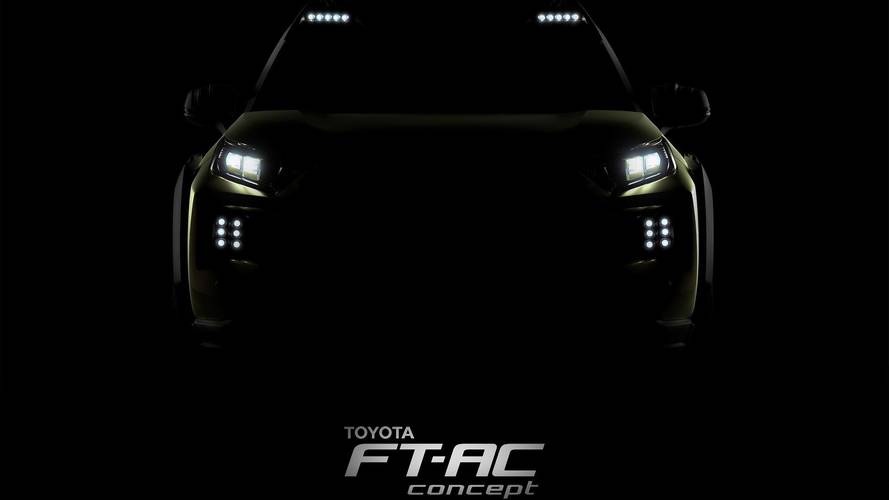 On November 30, Toyota will debut an off-road SUV concept called the FT-AC, meaning Future Toyota Adventure Concept. Information about the model is nonexistent, but the company promises that it has "all the ingredients for your next adventure." Look forward to learning more at the Los Angeles Auto Show.

The picture above is a lightened version of Toyota's official teaser, and it provides a slightly better look at the FT-AC. The front end looks quite rugged with broad fenders and chiseled styling. Knobby side mirrors lend an interesting appearance, too.

There should be no concern about lighting up the trail at night because in addition to the headlights, the SUV has groups of six LEDs on both sides of the front bumper. Plus, there's more illumination on the roof.

Toyota toyed with the idea of an off-road-oriented SUV earlier this year with the FT-4X Concept at the New York Auto Show. The vehicle featured retro-tinged styling that evoked the classic FJ40 Land Cruiser. The creators at Toyota’s Calty Design Research site imagined it as a model small enough to fit in an urban area but tough enough to work away from the pavement.

The FT-4X's interior fit the model's rugged aesthetic. For example, the door handles functioned as water bottles, and there was a sleeping bag in the armrest. Occupants would also remove the audio system would enjoying music outside of the SUV.

Toyota didn't provide specific powertrain details about the FT-4X. The company imagined it using a small-displacement four-cylinder and four-wheel drive with a low-range transfer case for crawling out of tough situations off road.