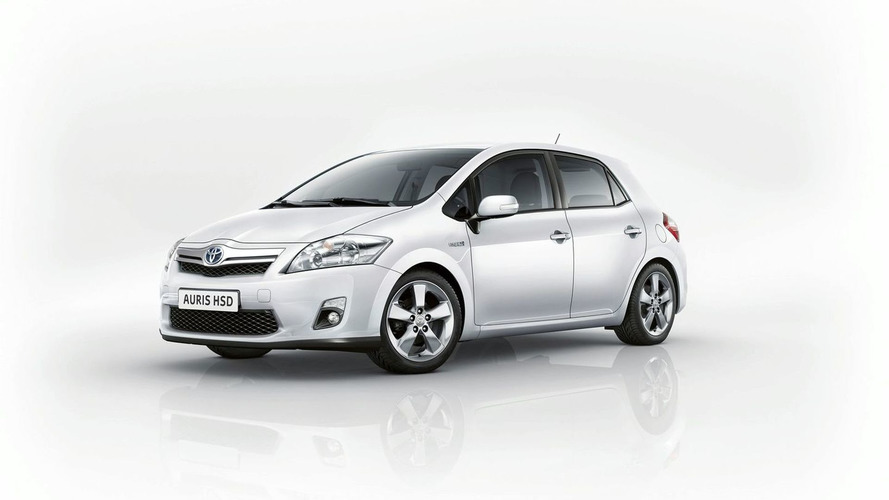 We have the full details about the hybrid version of the Toyota Auris inside, along with many photos.

Toyota has announced that the 2010 Toyota Auris HSD, or Hybrid Synergy Drive, will officially go on sale in Europe later this spring.  The car uses a 1.8-liter petrol engine and electric motor to provide nearly 62 mpg (US), consuming 3.8 liters of petrol per 100 km.

Still, the hybrid's direct emissions is reduced to about 89 grams of CO2 per kilometer.  The car is kept more efficient by a 0.283 drag coefficient, down from 0.290 on the other Auris models.  This is due to aerodynamic changes seen only on the HSD, including longer bumpers, and a better designed grille that improves air flow over the top and reduces resistance underneath.  Different lamps can also be seen.

The setup lets the car run on all-electric for up to two kilometers, and at speeds up to 50 km/h (31 mph).  Regenerative braking is also a part of the package.  The car features four driving modes, like EV, Eco, and Power.  The fourth was not mentioned.

The Auris HSD is available in three different trim levels, with the base level including 15-inch V-design alloys, stability control, push-button start, hill assist, and a rear spoiler.  One level up adds 17-inch rims, six-speaker CD radio, and Bluetooth.  The last step up adds on Alcantara trim.  Several options are also on offer.

You can read much more about the 2010 Toyota Auris HSD, and the six combustion engines available, in the press release below.