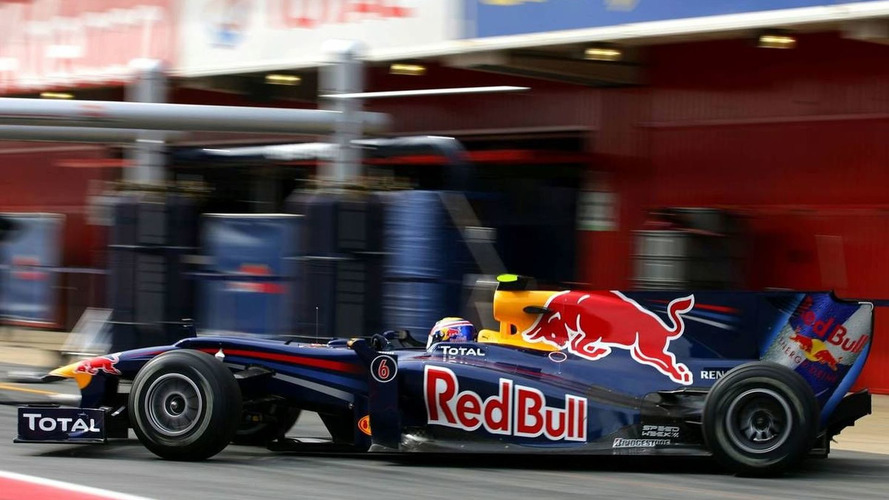 Red Bull made an early start to this week's final test of the 2010 pre-season.

Red Bull made an early start to this week's final test of the 2010 pre-season.

The Milton Keynes based team had booked the Circuit de Catalunya one day early, ahead of the group test scheduled between Thursday and Sunday.

Red Bull's exclusive use of the Spanish venue on Wednesday was for private video filming purposes.

But the German language Speed Week, an on-car sponsor of the team, reports that the day was put to good use by Red Bull Racing, with Sebastian Vettel at full speed in the morning before Mark Webber took over the RB6 in the afternoon.

Red Bull's day meant that, after the bad weather of Jerez, the Barcelona group test was unable to be extended by another day.

Continuing on Monday was also ruled out because the Barcelona circuit is booked for use by a junior racing series.

But the weather should be fairly good throughout the four days, with the only major threat of rain looming for Saturday's running.

The Barcelona test will be closely followed by the entire F1 world, with BBC commentator Martin Brundle - who will be in attendance - predicting the pecking order to become clearer this week.

"At some point, every team must be putting in some fast laps," the Briton is quoted as saying by Auto Motor und Sport.

Most teams will also be debuting Bahrain-spec upgrade packages, like Ferrari, who according to Spanish reports will have all-new wings and diffuser.

"I think Ferrari is ahead but lots of teams are close behind, including Williams," said Rubens Barrichello.

Toro Rosso's Jaime Alguersuari said in the Spanish press that Barcelona will be the "most real" test of the pre-season.

A report on Ferrari's website reads: "This will also be the last occasion to test with little fuel loads on board with the new qualifying (format) in sight."