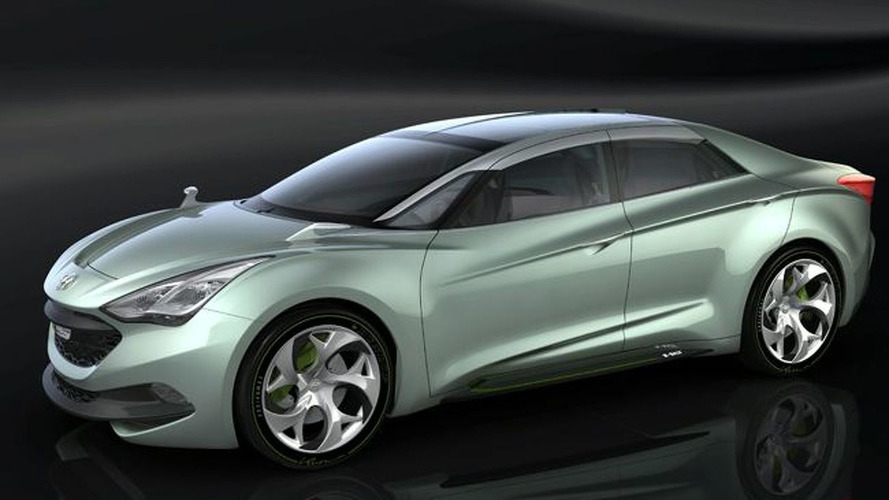 We have the scoop on eight new Hyundai vehicles getting their world debuts in Geneva. The full story inside.

In advance of Hyundai's eight world debuts at the Geneva Motor Show, the company has released another image of the Hyundai i-flow HED-7 hybrid concept - this time it's not a design sketch.  The car is meant to preview a new sedan that "redefines the perception of space" for D-segment vehicles.

Appearing alongside the concept, the company plans to debut the Hyundai i30u, the facelifted version of the i30.  The model will go into mass production just after its Geneva debut.

The i-flow is part of Hyundai's "fluidic sculpture" style theme.  As such, it has an impressive drag coefficient of 0.25, which helps the car run efficient.  The company used a 1.7-liter diesel engine with a two-stage turbo charger, six-speed dual-clutch gearbox, and an unspecified electric motor paired to a Lithium Ion-Polymer battery.  Combined with the low drag coefficient, the car produces a scant 85 grams of CO2 per kilometer, while using just 3 liters of fuel per 100km (78mpg US / 94mpg imp).

Inside, the cabin is centered "around an expansive, contoured screen, which recognizes not only touch but also gestural inputs along its fascia-wide display," according to a press release.  The exterior is finished in a "Liquid Metal" coating produced by BASF.

Meanwhile, the company says the i30u will show changes to design and performance.  Additionally, Hyundai will show off a hydrogen fuel cell electric vehicle of the ix35/Tucson, and five efficient Blue Drive versions of the i10, i20, i30, i30cw, and the ix35.