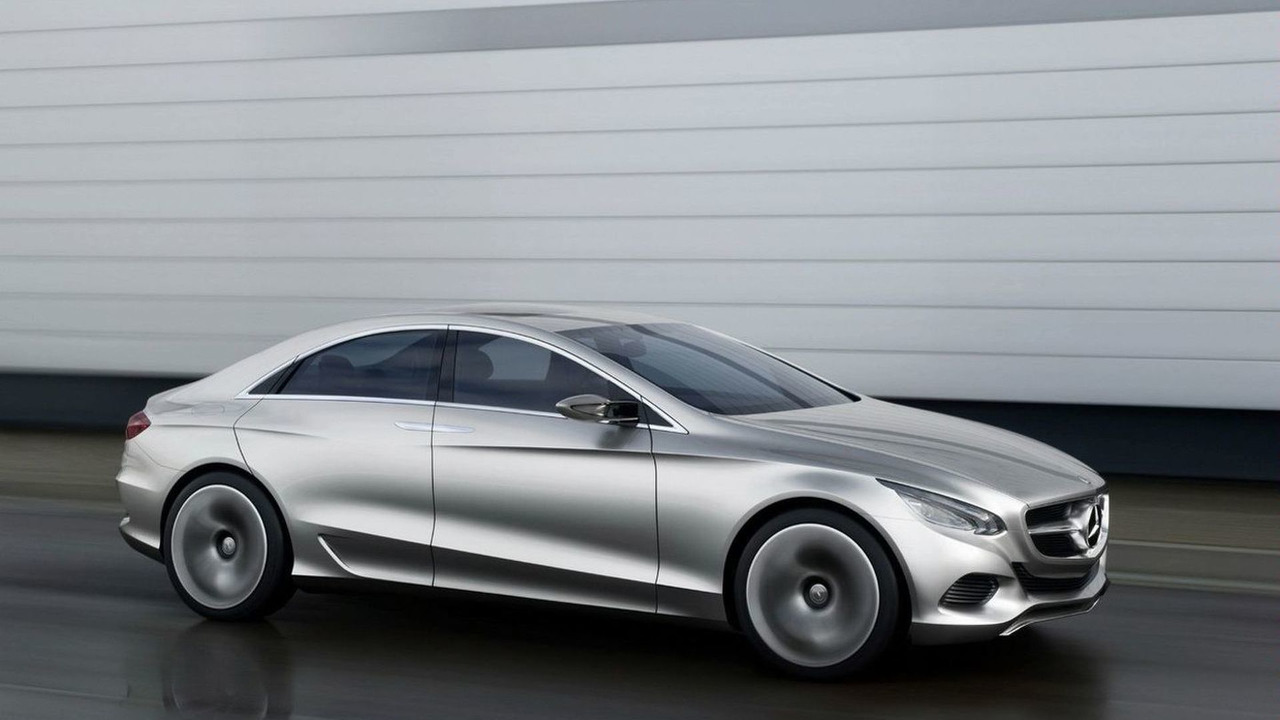 The concept uses an advanced multi-drive platform, which can accommodate a fuel cell or a plug-in hybrid system. Full details inside.

New details have emerged about the Mercedes F800 Style concept, which previews the 2011 CLS-Class.

Looking virtually identical to the Rising Car Sculpture, the concept features a bold front-end, LED lights, and 'pivot-and-slide' rear doors. According to Mercedes-Benz's Head of Design, Gorden Wagener, "The exciting coupe-like roof line, and in general the vehicle's balanced proportions, lend it a stylish sporty look that reinterprets the Mercedes-Benz design idiom and emphasizes the sculptural character of the F800 Style. The result is a harmonious blend of innovative form and function, which conveys a sense of great styling and authority."

Inside, the cabin features lightweight seats (made of magnesium and carbon fiber), luxurious wood veneers, and a flowing center console.

Under the hood, the concept uses an advanced multi-drive platform which can accommodate a fuel cell or a plug-in hybrid system. According to Mercedes, "Each of the drive systems takes up comparatively little space for the installation. This applies in particular to the electric drive with fuel cell, which has been enhanced by Mercedes-Benz to be compact and powerful. The front end's compact package was made possible through the consistent downsizing of all F-CELL components. As a result, the entire interior space is preserved and offers plenty of room for five occupants."

The fuel cell concept uses an electric motor that produces 136 PS (100 kW / 134 hp) and 214 lb-ft (290 Nm) of torque (estimated). It features components "taken from the range of available e-drive modules, which Mercedes-Benz developed for a variety of different electric vehicles. These components, which are already installed in the limited edition B-Class F-CELL, can be used flexibly and are suited for a variety of different drive configurations." The fuel cell is located in the front, while the electric motor is installed near the rear axle. Power coming from a lithium-ion battery is charged by "chemically reacting hydrogen with oxygen onboard the vehicle."

Besides advanced powertrains, Mercedes packed the Style concept with tons of technology. Goodies include an advanced COMAND system (with a touchpad on the center console and a camera that records video images of the user's hand as it works the pad, which enables it to recognize finger movements such as wiping, pushing, turning, and zooming), a 360 degree "Range on Map" function for the navigation system, a new DISTRONIC PLUS system with Traffic Jam Assistant (which handles steering and acceleration/braking - up to speeds of 25 mph), and a new PRE-SAFE 360 degree system (which engages the brakes roughly 600 milliseconds before an anticipated rear-end collision).

According to Dr. Thomas Weber, a member of Daimler's Board of Management responsible for Group Research and Mercedes-Benz Cars Development, "We are dedicated to reconciling our responsibility for the environment with practical customer utility in a fascinating automobile. The new F800 Style research vehicle combines this commitment to providing the leading innovative drive concepts with our traditional Mercedes strengths in the areas of design, safety, comfort, and outstanding performance."