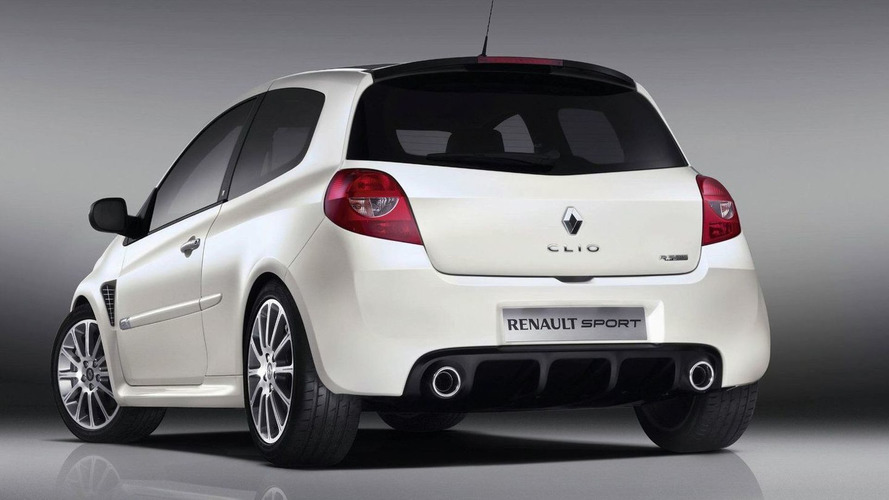 20th Anniversary versions of the Renault Clio include special paint jobs, and a decent amount of included equipment. Photos and details inside.

Renault will sell several 20th anniversary limited edition versions of the Clio.  The models getting the special treatment include the three-door Clio, five-door Clio Estate and the Clio RS.

As part of the package, the Clio RS will be painted in Pearlescent Givre (a.k.a. white), with black roof.  More choices will be available for Clio and Clio Estate purchasers, including metallic Cassiopee Grey, Dyna Red, Grey Blue, Pearlescent Black, and Platine Grey.  Non-metallic Glacier White is also available.  All of the vehicles will get "20th" badges on the b-pillar, along with glossy black front bumpers and side mirrors.  Inside, both cars get visible stitching on the dash, cloth upholstery in grey, and floor mats.  While the RS air vents are lined in chrome, the Clio's trim is anthracite grey.

The limited edition models have different standard equipment in different markets.  This could include Bluetooth, climate control, cruise control, darkened rear window, satellite navigation, and an upgraded stereo.  The RS also comes with 17-inch diamond-effect alloys from Be Bop.

Pricing for the Renault Clio 20th begins at €14,350, while the RS 20th starts at €24,700.  There are no performance upgrades included on either car.  In France, the ordering period begins today, with sales in other European markets starting in March.