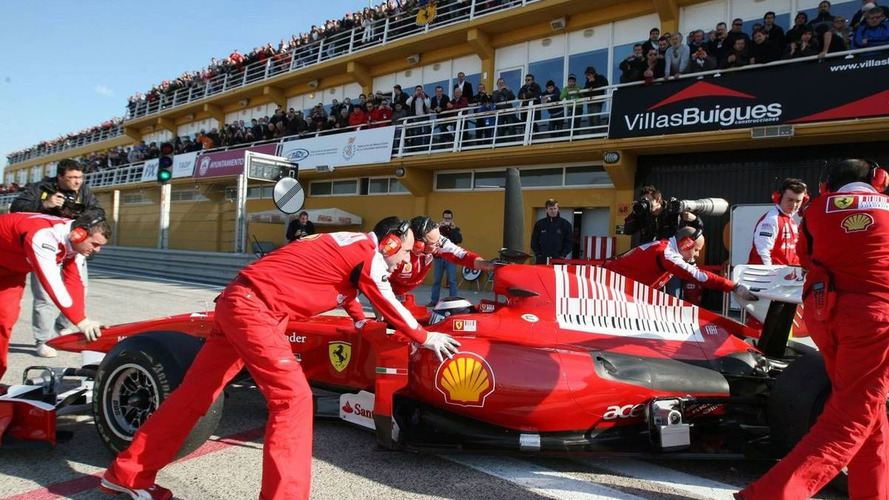 Estimates ranged from 30,000 to an incredible 50,000 spectators at the Ricardo Tormo circuit, with the majority streaming through the gates to see Fernando Alonso's Ferrari debut.

Heavy lines of traffic marked the beginning of the final day of F1 testing at Valencia on Wednesday.

Estimates ranged from 30,000 to an incredible 50,000 spectators at the Ricardo Tormo circuit, with the majority streaming through the gates to see Fernando Alonso's Ferrari debut.

Even the Spaniard's drive exit from the garage into the pitlane at the wheel of the new F10 was complicated due to the masses of eager photographers, but after more than two hours of running he was comfortably heading the time sheets.

Sauber was again impressive with its C29, but Pedro de la Rosa also had an early glitch when he bumped wheels with Nico Hulkenberg, who was getting his first real taste of the new Williams.

The Spaniard's incident brought out a red flag to have his car recovered, after it incurred minor bodywork damage.

Also trying a new car for the first time was reigning world champion Jenson Button, who began his day by posing on the wheel of the striking MP4-25 for photographers.

McLaren's Briton was fifth on the time sheets after two hours, behind Jaime Alguersuari - getting his first taste of the new Toro Rosso - and also Michael Schumacher, as the seven time world champion tried an all black prototype Schuberth helmet before reverting to his red design.

Vitaly Petrov made his F1 test debut in the R30 Renault.