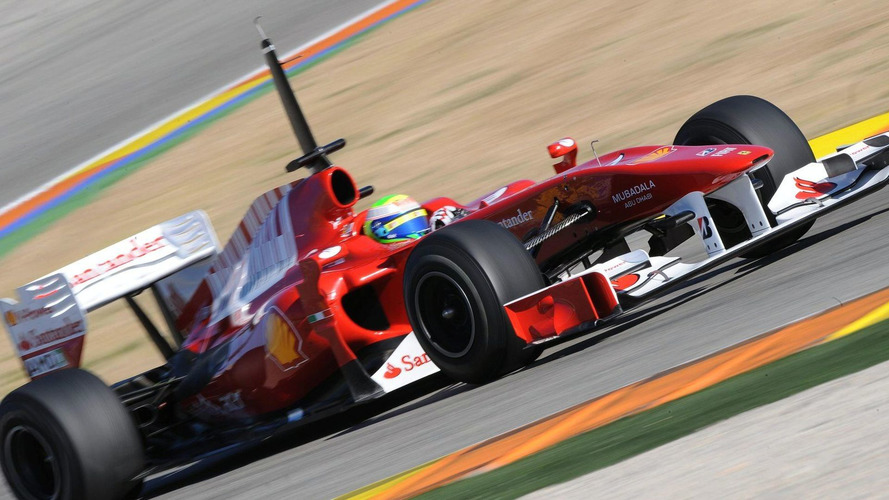 The Michael Schumacher media frenzy aside, the performance of Ferrari's new car was a major point of interest as official testing kicked off on Monday at Valencia.

The Michael Schumacher media frenzy aside, the performance of Ferrari's new car was a major point of interest as official testing kicked off on Monday at Valencia.

With an unique-looking double diffuser, the F10 in the hands of Felipe Massa sparred throughout the day for the quickest times with Sauber's Pedro de la Rosa.

Massa, insisting he is completely recovered from his Hungary crash last year and feeling "zero fear" to be back on a track with his rivals, ended up with the quickest time.

"The first impression of the car is really positive: it is easier to drive compared to the F60, we can work better on the set up and last but not least there's much more grip, which makes it much more pleasant to drive," said the Brazilian.

It is believed Massa's best time at the end of the day was set on lower fuel, with his pace over longer runs arguably even more impressive.

Said Ross Brawn, boss of Mercedes GP: "Ferrari have clearly got a good car, but it's too early to say (what is the pecking order)."

Rubens Barrichello, sixth quickest at the wheel of the new Williams, agreed: "You can't predict anything from the times today; and probably won't be able to for the remainder of the tests because of the fuel loads people will run with such big tanks.

"It probably won't be until Bahrain qualifying that we will see where everyone is," the Brazilian added.