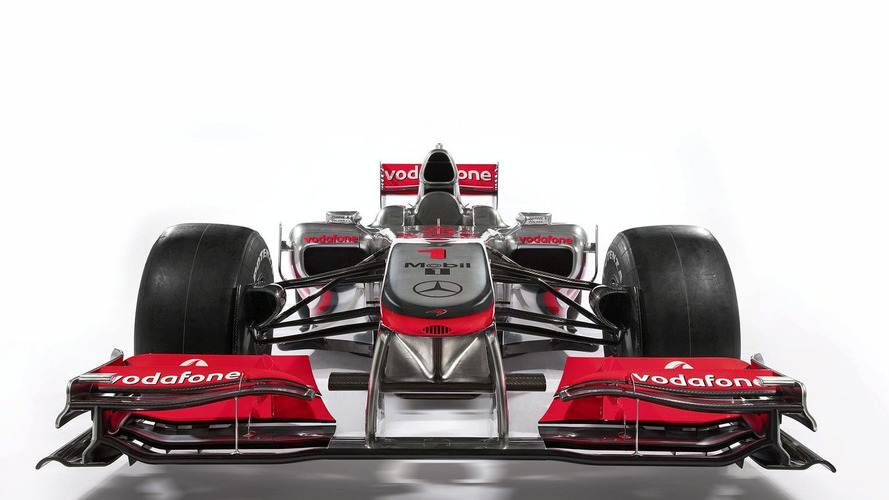 The wraps came off a visibly different McLaren on Friday morning, but the British team has retained its silver livery despite the departure of Mercedes as a works backer.

World champion and team newcomer Jenson Button and Lewis Hamilton pulled the covers off the MP4-25 at title sponsor Vodafone's Newbury headquarters, in front of a massed media contingent and a live global internet audience.

"The car looks so much different, completely different," said 2008 title winner Hamilton, as observers opine that it is the third 2010 car seen so far that incorporates a 2009 Red Bull-style high front nose.

Team boss Martin Whitmarsh said the car is so much longer than last year's that it did not fit in the factory's custom lifts, and for the first time McLaren has incorporated a radical 'shark fin' engine cover.

He also said the car's double-diffuser design is "fairly extreme", and admitted that the car was positioned on the stage to shield the rear from the photographers' lenses.

At the Ferrari launch on Thursday, designer Aldo Costa said he thought at least one team was "on the limit" of legality with its 2010 double diffuser design.

Fielding a question about the car's silver colour, Whitmarsh referred to McLaren's long-standing and ongoing relationship with Mercedes, which has included periods of increased and decreased involvement.

"It's a McLaren brand colour, it works for our partners and us," he added.

In 2010, the German marque is only an engine supplier, but the three-pointed star as well as the full Mercedes-Benz name remain on the car.

Meanwhile, Button will revert to his usual Union Jack-coloured helmet livery in 2010, after using an incandescent yellow version with Brawn last year.

And despite Whitmarsh attending the Mercedes GP livery launch on Monday, Norbert Haug was a no-show in Newbury on Friday: the official line was that he has lost his voice.