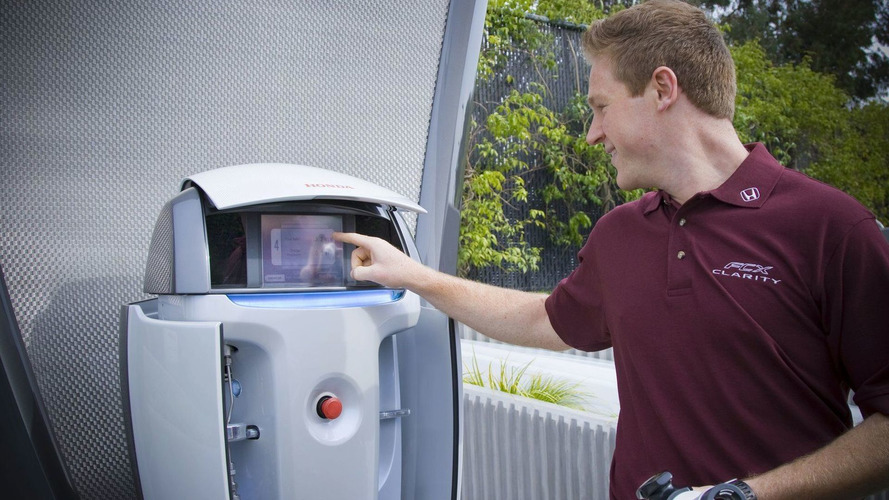 Honda's new home-based Solar Hydrogen Station is an innovative development, but does it work well enough for most consumers? Photos and details inside.

Honda has launched a new solar-powered hydrogen fueling station capable of refilling fuel cell electric vehicles overnight.  The device, under development for ten years, could theoretically be installed in the home garage of any future customer.

The single-unit station produces 0.5 kilograms of hydrogen over an eight-hour period.  Sadly, many consumers would likely not find this to be purposeful in many situations.  0.5 kg of hydrogen will only move the Honda FCX Clarity a total of 30 miles.

Honda's new home station is not meant to replace commercial filling stations, which will still be necessary to fully fill a vehicle quickly, often in less than five-minutes.  The slow-fill home-based station would be used to reduce costs to the end user.

A full "fast fill" at a commercial location would provide the Honda FCX Clarity with a 285-mile range, according to a press release.  However, the FCX Clarity's range is listed at 240 miles on the official website for the vehicle.

Honda claims the fuel is produced more efficiently in the new home station than previous solar units, with enough hydrogen created for a typical urban or suburban commute.  This efficiency was increased by 25% thanks to a smaller and lighter "high differential pressure electrolyser," replacing a system made up of an electrolyser and separate compressor.

Because the system is missing a storage unit, the station will only produce hydrogen when a vehicle is connected.  Although some would no doubt prefer to refuel quickly by tapping into a storage tank, the tank would likely prevent the system from being installed at many homes due to land-usage and zoning rules.

The system's solar panels hook up to the grid, sending electricity during daylight if a vehicle is not hooked up.  Honda says most customers would use off-peak electricity to power the station when recharging overnight.