Could This Porsche Fan Render Be A Suitable 918 Spyder Successor? 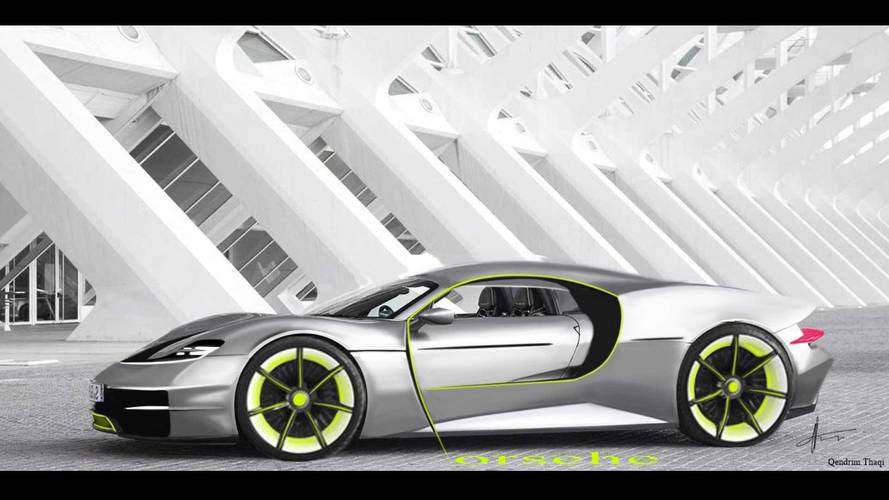 It's called the Porsche 9RE, though we see shades of Bugatti and Lamborghini in the design.

What could top the incredible Porsche 918 Spyder? A person named Qendrim Thaqi from Heilbronn, Germany has a proposal he’s calling the Porsche 9RE, and it’s pretty interesting. Six renderings are posted at Bēhance.net, and though we’d really like to see more than a side profile with five slightly tweaked front-on shots, it’s enough to tickle our automotive senses.

The first thing we notice on the profile render is the good job Thaqi did in channeling Porsche’s design ethos, at least up front. Even if we didn’t have some background on the car, the long nose with a single grille down low absolutely screams 911, or possibly even Panamera. It appears to have a bit less rake than the 918, but it’s still an unmistakably Porsche design.

The rest of the car, well that’s debatable. We think the design tries to incorporate the 918’s side intakes, but in the profile at least the car comes across looking more like a Bugatti Chiron than anything from Porsche. Then again, both manufacturers are under the Volkswagen umbrella, so a bit of DNA-sharing isn’t necessarily out of the question.

From the front, we’ll come right out at say it – this is a Lamborghini. That’s not necessarily a bad thing, but if the Porsche badge was replaced with a raging bull it wouldn’t look out of place. Perhaps if the headlamps had more of a traditional Porsche teardrop shape it would look more the part, but going through all five head-on renders (which are pretty much identical, save for some lighting and extra bits on the hood) we feel the same. It's neat, but it doesn’t really look like a Porsche.

Thaqi makes no mention of potential power sources or other technologies beneath the 9RE’s skin. Considering the 918 is a plug-in hybrid dynamo with 900 horsepower and all-wheel drive, such a successor would do well to have at least 1,000 horsepower.

It can be easy to go a bit bonkers on renderings with wings and diffusers and such, but this 9RE has a down-to-earth design that we could easily see on a production car. What do you think of something like this as a successor to the 918 Spyder?