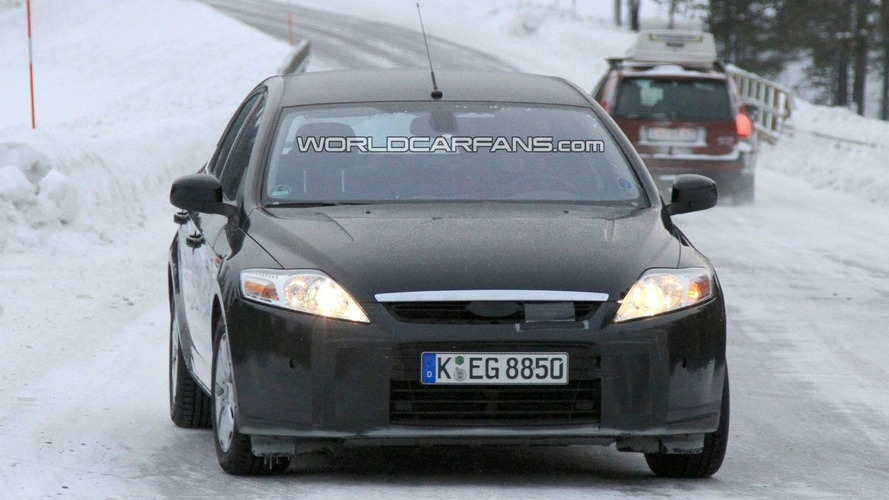 We have a series of new spy photos featuring the 2011 Ford Mondeo facelift. Find out more inside.

New spy photos of the 2011 Ford Mondeo facelift have surfaced six weeks before its introduction in Geneva.  The car was spied during cold weather testing along European route E45, a road that runs from the northern Sweden/Finland border down to the southern tip of Sicily, Italy.

The new pictures show a car, powered by the TDCi engine, that has faced at least one challenge: the car looks to be scratched and dented at the bottom of the rear passenger-side door.

Under Ford's Kinetic Design scheme, engineers included a new front bumper with other changes expected on the facelifted model.  The prototypes are still sporting black tape covering up details here, which may include LEDs.  A new grille is also expected here.  Test vehicles also seem to indicate that the next model will have new side mirrors, as well as rear LED clusters.  Changes to the rear bumper are also possible, and interior upgrades are anticipated.

Look for the 2011 model year Mondeo to get the Galaxy facelift's 200-horsepower 2.0-liter Ecoboost engine mated to a six-speed dual-clutch transmission, and the 2.0-liter Duratorq TDCi diesel.  The diesel will be available with either 113, 138, or 160 horsepower.

Eventually, a four-cylinder 1.6-liter Ecoboost producing up to 180 hp may also be offered.

Look for the 2011 Ford Mondeo facelift to be introduced at the Geneva Motor Show in March.