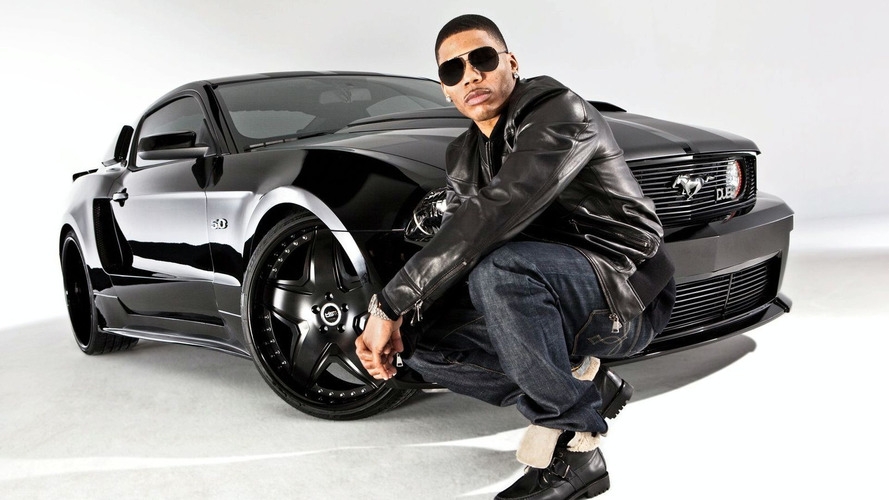 An all-black customized 2011 Ford Mustang GT will feature prominently in the album artwork for the next album from Nelly. Photos and details inside.

Rapper Nelly's next album will feature a tuned version of the 2011 Ford Mustang GT.  The cutom job is the result of a DUB Magazine project, and includes black racing stripes on the glossy black exterior, blacked-out wheels, and a billet grille.

Nelly has been a spokesman for Ford since 2008, when he unveiled a customized Ford Flex at SEMA.

The 5.0-liter V8-engined car rides on 22-inchers up front, and 24-inch wheels in back.  Tires come from Pirelli.` Other features on the car include angel eye headlights, Borla exhaust, hood scoop, and tinted taillights.

Inside, the car was given a bit of a makeover, and now includes suede and leather upholstery.  The sound system from JL Audio includes new amps, speakers, and dual 12-inch subwoofers.

35-year-old Nelly, a car enthusiast, appreciates the iconic stature of the Mustang.  "At some point, you've had a conversation about a Mustang - and it was probably one about you wanting to get behind the wheel of one," he said in a Ford-issued press release.

"I've always loved the Mustang; the vehicle has power to the point where you can't help but want to hit the pedal."

Nelly's next album, which is currently untitled, is due out this spring.