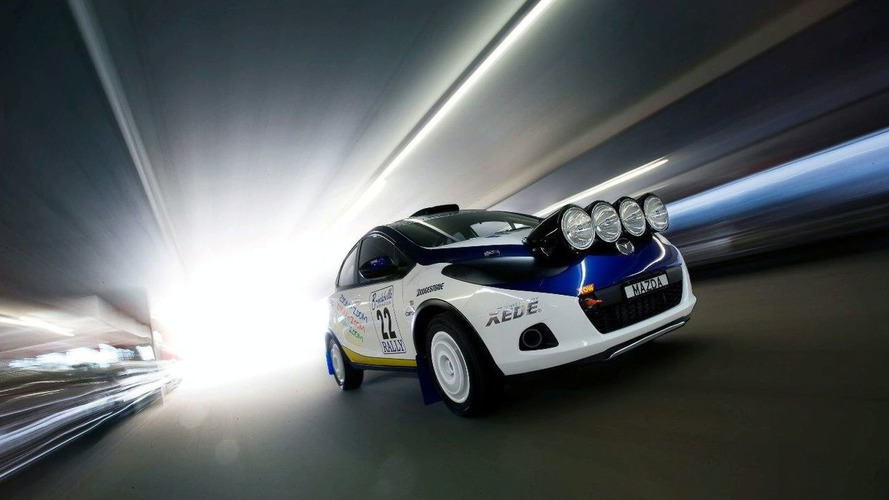 Mazda 2 Extreme is another custom gem from Mazda Motorsport Australia. Sporting a full roll cage, fire extinguisher and rally suspension, this little Mazda is ready to play in the gravel.

Australians bought over one million cars last year which is impressive considering there are only around twenty million people occupying its shores. Nevertheless, it is home to a truly unique motor industry that mass produces indigenous vehicles that are not seen in many parts of the world. But it is not just mass produced vehicles that attract the attention, the Australian car industry is not unfamiliar with producing bespoke custom designs as well.

Take this Mazda 2 that you see before you. Hiding behind four rather large Hella spotlights is a Mazda 2 with a difference. The car is the latest in a long line of customised Mazda models that have been given the “Extreme” make over by Mazda Motorsport Australia. This is the second Mazda 2 that has received a thorough customizing as back in 2005, an older model “2” was the benefactor of such treatment. This little Mazda clearly has a rallying theme behind its inspiration and the modifications run further than skin deep.

Mazda have said their goal is to increase the cars real world performance by 20%. This could mean a number of things and does not necessarily gift the little car a 20% power hike. Mazda have not quoted figures but they are currently working on the engine so we can expect some improvements over the standard cars 76kW and 137Nm outputs.

The suspension has been fully reworked by Murray Coote who is renowned for developing some of the best suspension systems fitted to modern rally cars. The suspension works through a set of 15 inch Compomotive alloys shod with Bridgestone Potenza tyres. The interior is “stage” ready and is equipped with a roll cage, full five point harnesses, fire extinguisher and the obligatory hydraulic handbrake. There is no sign yet if Mazda Australia will run the car competitively.