Mazda has announced it is ready to reveal the next generation Mazda6 and this will happen during the 2017 Los Angeles Auto Show later this month. The Japanese manufacturer will bring the final production model to L.A., not a concept, and promises it’s been “thoroughly re-engineered.”

Judging by the first exterior image of the vehicle, the design will retain virtually all core characteristics of the current Mazda6, including the muscular wheel arches and relatively short overhangs, but will benefit from a revised front end in the same way the CX-5 was refreshed. This means the Mazda6 will gain a larger radiator grille and slightly more aggressive headlights.

The interior will also be only slightly redesigned with reshaped center console and new controls for the climate system. This is what we see from the single interior photo, but most likely there are some more changes.

Mazda promises a wide range of new advanced electronic systems, such as the Mazda Radar Cruise Control (MRCC) system, which now works to completely stop the car and then accelerate it again depending on the preceding vehicle’s speed, as well as the latest generation 360-degree camera system. 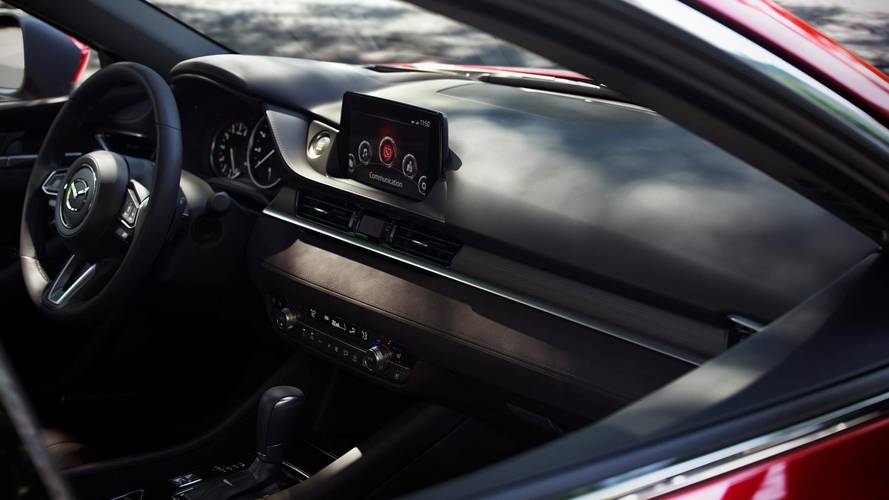 As far as the engine range is concerned, in North America Mazda will sell the car with two 2.5-liter gasoline engines. One is a naturally aspirated version using direct injection technology and cylinder deactivation, which can switch between four- and two-cylinder operation depending on the condition. There’s also a turbocharged variant of the same motor, basically the same engine Mazda already offers for the CX-9, where it produces 250 horsepower and 310 pound-feet of torque.

In Los Angeles, Mazda will also reveal an updated CX-5 for the U.S. market and will demonstrate a couple of concepts, like the Vision Coupe “next generation design vision concept” and the MX-5 Halfie – “a half production, half race car demonstration model.” The company’s press conference is scheduled for 6:30 PM GMT time on November 29.

The powertrain line-up includes the SKYACTIV-G 2.5-litre direct injection petrol engine with a cylinder deactivation system that seamlessly switches between four and two-cylinder operation to further improve real-world fuel efficiency at no cost to performance. The turbocharged SKYACTIV-G 2.5T petrol engine that debuted with the Mazda CX-9 crossover SUV, meanwhile, will also be added to the range of powertrains offered in North America.

As for the styling, designers have enhanced the feeling of quality inside and outside the new Mazda6, adding maturity and composure to its award-winning look. The top package features exclusive trim elements like the Japanese sen wood used for traditional musical instruments and furniture. The design is simply more elegant and dignified overall.

An even wider range of advanced i-ACTIVSENSE safety technology is available to help the driver identify potential risks and reduce the likelihood of damage or injury, thus delivering a more relaxing and confidence-building experience behind the wheel. Mazda Radar Cruise Control (MRCC) can now bring the car to a standing stop and take off again when the preceding vehicle pulls away. The new Mazda6 also adds the carmaker’s latest 360° View Monitor.

Other highlights of Mazda’s exhibit in Los Angeles include the highly acclaimed Mazda VISION COUPE, a four-door design concept recently unveiled in Tokyo, the Mazda RT24-P prototype racer and the Mazda MX-5 “Halfie”, a fusion of race car and production model.

Mazda will hold a press conference at 10:30am (19:30 CET) on 29 November, the first of two press days. Follow the unveiling of the latest edition of the Mazda6 on livestream at: insidemazda.mazdausa.com/new-mazda6. The show is open to the public from 1-10 December.