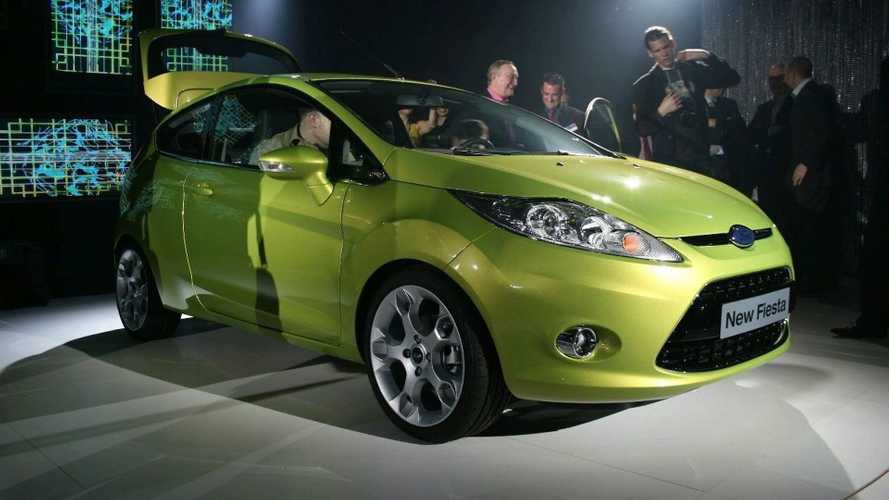 When asked if Ford needed to make concessions to be popular in all markets, Fleming replied, â€œIf the car looks good, and drives well, then we're not making any compromises.â€

Introduced earlier tonight in the comfortable confines of Geneva's President Wilson Hotel, the new Ford Fiesta received an underwhelming response from the journalists attending its unveiling. Based on the Verve Concept, the public will get its first look at the new car during the Geneva Motor Show beginning this week.

Two editions of the car, one in metallic magenta and the other in lime green, matched the cocktails nicely, a fact that could only help journos on deadline from remembering some of the grittier details of the Fiesta. Details like its leather and purple-on-purple polka dot interior. Or the somewhat cheap feeling glove compartment. Or the incredibly inconvenient Bluetooth number pad, placed on the opposite side of the dash from the driver, and angled towards the passenger seat.

Production of the all-new Ford Fiesta begins later this year in Spain, with supply going out to the European Union. An American and Asian model will also be produced within the next two years. Ford Europe CEO John Fleming thinks the Fiesta will be able to find its market everywhere. When asked if Ford needed to make concessions to be popular in all markets, Fleming replied, “If the car looks good, and drives well, then we're not making any compromises.

Despite its misgivings, the new Fiesta's styling is a vast improvement on Fiestas of the past. Although flawed inside, the interior is still designed better than other Ford products. Power comes in at 115 PS, generated from its 1.6-liter petrol engine. Not much, but not bad for an entry-level car either. Plus, with a schnazzier RS coming out at a later date we expect consumers to have a more robust engine option down the line.