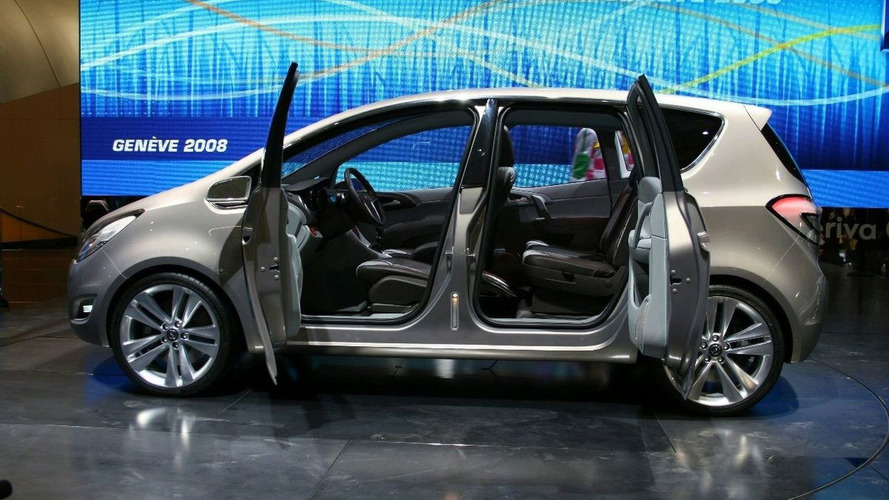 Funky door set up on Meriva concept is Opelâ€™s new FlexDoor system. Looks like the old Suicide doors are making a return.

This is how the next Opel/Vauxhall Meriva will look like. Well sort of, concepts such as this one give a real clue to what a future model will look like but often subtle changes are made before the vehicles hit the road for good. Nevertheless, for a Mini MPV it looks pretty attractive. The Car buying public are asking a lot more of little cars these days because many are downsizing with the cost of fuel spiralling. These customers still want lots of space though which has led to manufacturers putting out what can only be described as steel boxes on wheels. Fact is, the current Meriva falls into this category as it is a rather slab sided affair to look at. It would seem Opel are now trying to add a little flair to this category.

Big news for this concept is Opel’s new Flexdoors system. This system has been around for decades and dates way back to the start of the 20th century. Commonly referred to as “Suicide Doors” the front door is conventional in design and therefore hinged from the front A pillar. The rear door is hinged from the rear or C pillar and opens in an arc to the rear of the car effectively forming a mirror image of the front door. The FlexDoor system continues to use a conventional B pillar though, but the roofline is quite high on the Meriva and the door openings appear generous so the pillar does not appear to hinder access. Opel say the pillar is required for side impact. The system is simple and looks highly effective.

There are other systems on the market such as Mazda’s which do without the B pillar, but these vehicles have a much smaller aperture and the rear doors can only be open when the front doors have been opened first. The Concept is fitted with a 1.4L turbocharged engine.