Plot twist: In a different test, the Superb actually managed to win.

Other than the fact that both are large sedans with ample rear legroom, there’s not much the BMW 7 Series and Skoda Superb have in common. Providing an answer to a question we’re pretty sure nobody has asked, Carwow’s charismatic presenter Matt Watson decided to organize an unusual drag race with the fastest versions of both models: the M760i and the 280-hp Superb. 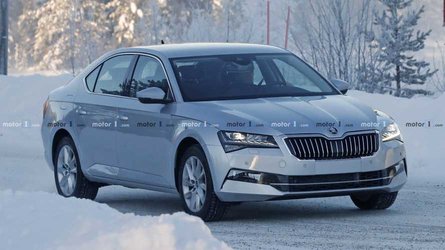 Czech This Out: Skoda Superb With 560 HP Has Double The Stock Power

With a sprint to 62 mph (100 kph) done in 5.8 seconds, the range-topping Superb is far from being slow, but it doesn’t hold a candle to the twelve-cylinder 601-hp powerhouse from Bavaria. In the first test, the first-ever M Performance 7 Series completed the quarter mile in 11.3 seconds whereas Skoda’s quickest car to date needed 13.4 seconds.

The next test might spark some controversy: the Skoda tries to overtake the BMW, but when the two cars are side by side, Matt pushes the pedal to the metal in an attempt to stop the Skoda from pulling ahead. While that’s perfectly ok on an enclosed road, it goes without saying it’s illegal to do it anywhere else.

In the third test, the Skoda Superb actually manages to take the win by needing a shorter distance to come to a full stop. That doesn’t come as a big surprise since although the M760i may very well be better in just about every way, it can’t defy the laws of physics. It’s a whopping 700 kilograms (1,543 pounds) heavier than the VW Passat-based Czech sedan, so obviously it needs more time to come to a halt, despite its high-performance brakes.

The last two tests focus on the interiors of both cars by comparing the noise levels as well as the vibrations. Naturally, the BMW comes out on top – as it should considering the massive price difference. Since Skodas are (sadly) not available in the United States, we’ll compare the starting prices of the base Superb and 7 Series in Germany: €25,750 vs €87,200. That means you can buy three base Superbs for the price of a standard 7 Series and you will still have money left for a Citigo and a full tank of gas.

Overall, the M760i is declared the winner. In other news, sky is blue and grass is green.