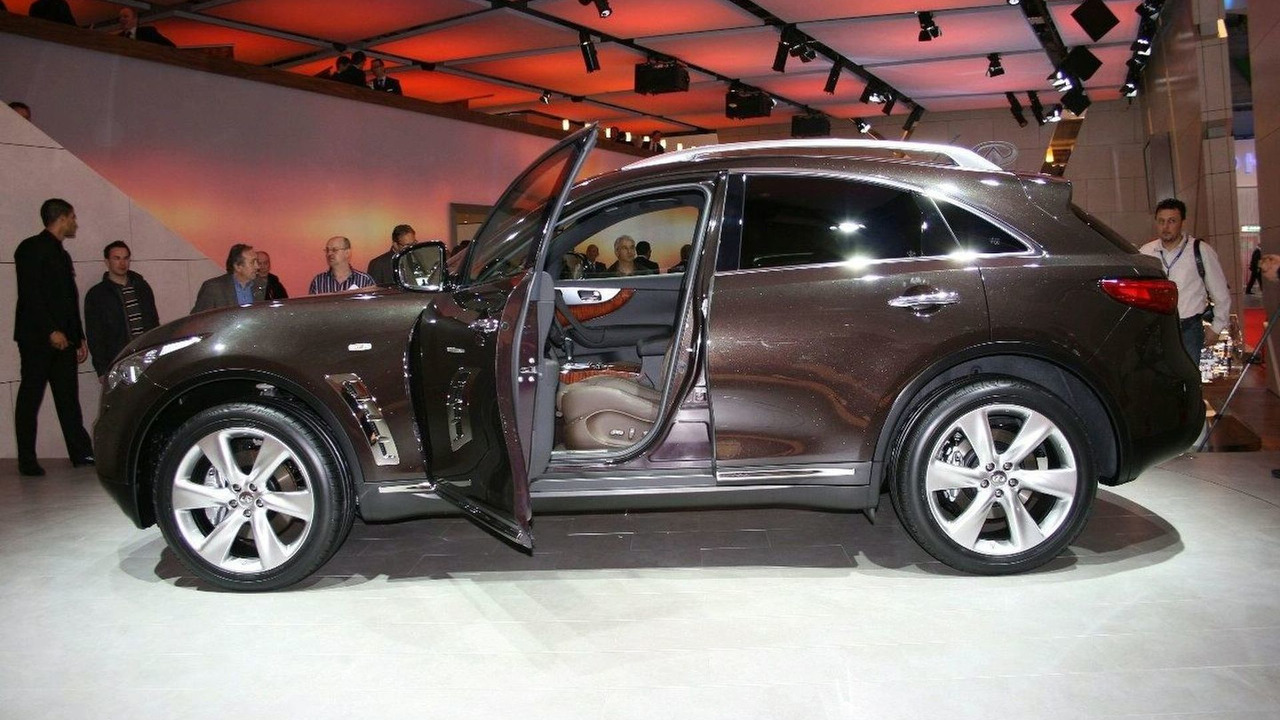 5.0L 390 hp V8, 7 speed auto and all wheel drive and an inspired design mark out Infinitiâ€™s new FX50 crossover. US launch in June and Europe launch by October.

After months of anticipation and build up, Europe now officially has a new luxury alternative to the ubiquitous German marques. Infiniti have already released details of their forthcoming G37 coupe and saloon together with their small cross over, the EX37. These vehicles have been received warmly by the often critical European press.

Infiniti are deadly serious about Europe and who would doubt their future success with Carlos Ghosn at the helm. Mr. Ghosn is highly revered within motoring circles having dragged ailing car giant Nissan from the brink of bankruptcy and nurturing Renault to success. Mr. Ghosn held tonight’s (04/March/08) event held at the Geneva Motor Show to showcase Infiniti’s European line up, but more importantly, the global launch of Infiniti’s most distinctive model, the FX.

All this performance is fed through Infiniti’s intelligent four-wheel drive system called ATTESA-E TS with Electronic Stability Program (ESP) and Traction Control (TCS). Although Infiniti’s FX has always been amongst the leaders of the pack with respect to performance, it is the styling that is truly remarkable and has always differentiated it from its adversaries.

The first generation FX was concept car stuff when first released and still today strikes a silhouette that is unique. Perhaps it is fortunate that Infiniti’s designers have maintained the general shape of the original vehicle. The styling is best described as dramatic and will certainly polarise some groups, but it is definitely unique and will gain many admirers. The exterior is finished off with some huge 21-inch alloys.

"After a 20-year journey, we believe Infiniti is ready... with a fresh, distinctive choice for Europe's most discerning customers," Mr. Ghosn said.

The all-new Infiniti FX50 will be available in North America in June 2008 and in European markets starting from October 2008. Two comprehensive press releases follow.