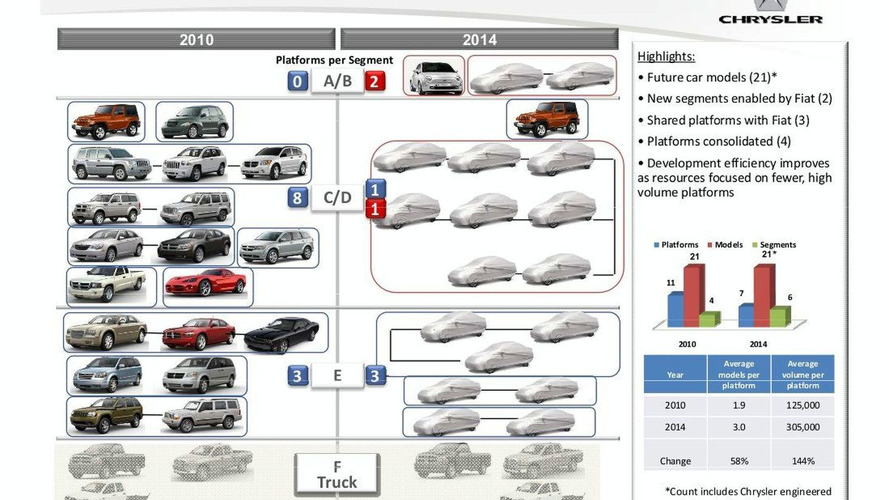 Chrysler has outlined their five-year product plan during a lengthy press conference at their Technology Center in Auburn Hills, Michigan.

Chrysler has outlined their five-year product plan during a lengthy press conference at the automaker's Technology Center in Auburn Hills, Michigan.

The plan has multiple phases and the first results will be seen in 2010, when a number of underperforming vehicles are given an emergency facelift. Key recipients include the Chrysler Sebring sedan, the Jeep Patriot, the Jeep Compass, the Jeep Wrangler, the Dodge Avenger and the Dodge Journey.

While facelifts will be huge in 2010, the company will also launch new versions of the Chrysler 300, the Jeep Grand Cherokee (which arrives in May), the Dodge Charger, and a new full-size Dodge SUV (likely a Durango replacement, based on the redesigned Jeep Grand Cherokee).

During 2011, the Wrangler will receive a new interior and various other upgrades.

In 2012, the Dodge Caliber will be put out to pasture. It will be replaced by new compact sedan given to Chrysler and Dodge.

In 2014, Chrysler and Dodge will launch new versions of the Town & Country and Grand Caravan minivans.

The newly created Ram brand (aka Dodge Trucks), will kill the Dakota pickup in 2011 (could be replaced by a car-based vehicle) and launch new Fiat-based commercial vans in 2012.

According to the Fiat overlords, Chrysler will have projected $5 billion operating profit (by 2014) thanks to the sale of 2 million vehicles per year (up from 950,000). While it sounds like everything Chrysler designed will be killed, only 56 percent of Chrysler's vehicles will be based on Fiat platforms by 2014.