2018 Mercedes A-Class Spied Without Any Camouflage 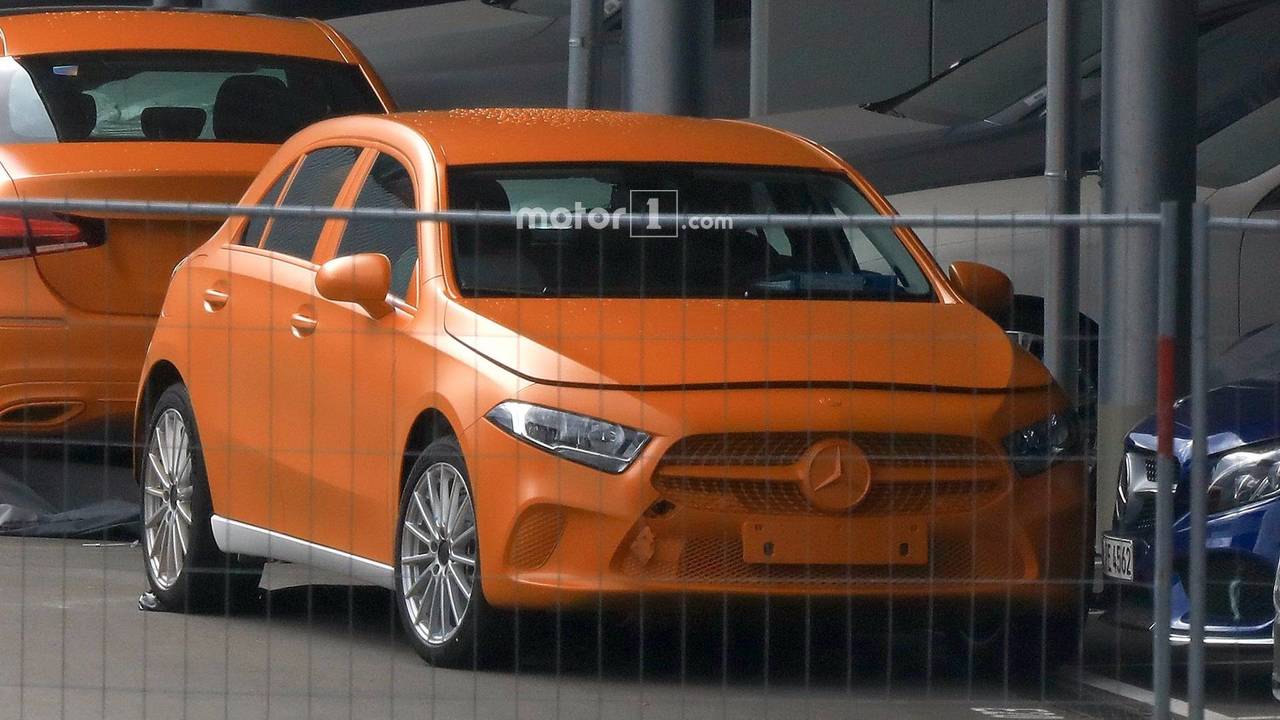 Bonus: We can also catch a glimpse of an undisguised A-Class Sedan.

Ladies and gentlemen, this is it. Today we are able to bring fully revealing exterior images of the next-generation Mercedes A-Class ahead of the premium hatchback’s debut scheduled for 2018. By the looks of it, we are likely dealing with a car built for crash testing purposes judging by the orange paint. Taking into account the small wheels and what seem to be halogen headlights, the vehicle in question is a lesser trim level.

In some of the adjacent spy images we can also see the rear end of the first-ever A-Class Sedan sitting right behind it, also covered in orange. This new sub-CLA model has already been previewed through the Concept A Sedan unveiled earlier this year in China during Auto Shanghai. It’s already clearly obvious the taillights will look almost the same, albeit the clusters are a bit rounder and the lighting signature doesn’t send out the same high-tech vibe.

Both the hatch and the sedan have a somewhat predictable design as the aforementioned concept managed to paint an accurate picture of what to expect from the road-going A-Class models. Compared to the outgoing car, the new entry-level car from Mercedes will adopt sharper headlights and taillights lending the A-Class a slightly sportier appearance. The side mirrors will be moved from the A-pillars to sit lower on the door panels – probably to enable a sleeker body with a lower drag coefficient.

Although it’s hard to say by looking at these images, the next generation is likely slated to grow in size a little bit, particularly when it comes down to the wheelbase to boost rear legroom. Speaking of which, the A-Class Sedan is expected to spawn a LWB derivative – likely only for China - next year as per a roadmap published by Mercedes a couple of months ago:

Riding on an evolution of the MFA platform, the new A-Class five-door hatchback could debut at the Geneva Motor Show in March. Once again, the lineup will be topped by an A45, which has already been confirmed to get at least 400 horsepower and there might even be a more powerful derivative. A prototype of the AMG model was seen recently with quad oval exhaust tips, thus fueling rumors about a “Predator” variant with a hybrid powertrain.

To the surprise of some people, there will be another B-Class and this time around Mercedes is making more efforts to separate the minivan from the hatchback. Elsewhere in the compact car family, the CLA will be moved upmarket to make room for the A-Class Sedan and we’ve been hearing gossip about a GLB crossover.

All of these vehicles are slated to share a revamped interior cabin with a dual digital screen layout as seen in the more expensive Mercedes models. That means the analog instrument cluster will be replaced by a fully digital display, at least on the upper-spec models as in some countries the cheaper trims could still have an old-fashioned setup. At the same time, the controversial tablet-style infotainment will become a thing of the past since the display will be neatly integrated into the dashboard.

If the A-Class will land in Geneva, it likely means we will get to see it online as early as February.

Photos of the undisguised A-Class: Automedia

Photo of the A-Class interior: CarPix