This Is The Woody-Inspired Supercar You Never Knew You Wanted 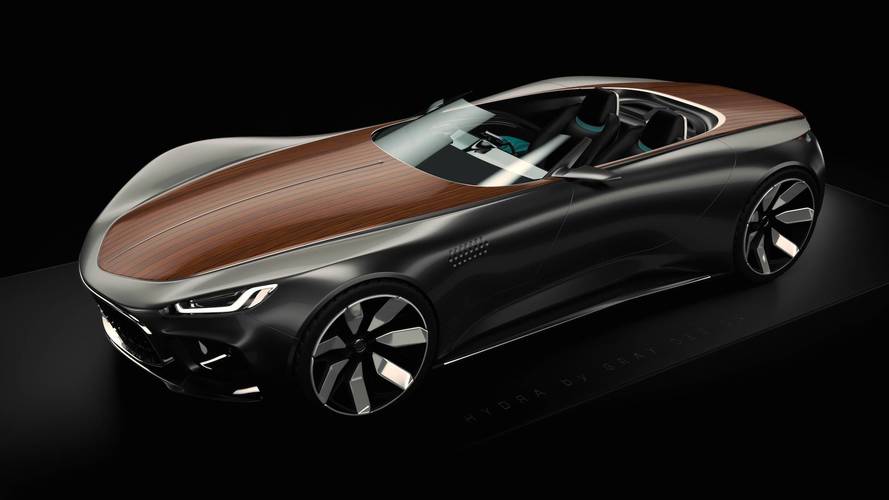 Looking for the ultimate car, motorcycle, and hydrofoil combination? Do you dream of the days when manufacturers still used wood paneling? Then you might want to call up the design team at Gray Design. The Swedish firm has been dreaming up fantastic creations, everything from supercars to super yachts, for a number of years now – and their latest idea is something any super wealthy station wagon enthusiast should appreciate.

Dubbed the Hydra collection, the renderings pictured here include a Hydra concept car, a Hydrafoil boat, and a Hydros motorcycle. The three combine "technology, style, and speed" into a single luxurious package, with plenty of retro-inspired wood paneling to boot.

By sea, the 31-foot (9.5-meter) Hydrafoil concept is a luxurious high-speed hydrofoil boat that comes with a steerable front foil, allowing for adjustments of up to 32 times per second. Sleek auto-inspired styling, both inside and out, includes features like wrap-around limousine seats, multiple infotainment displays, and even a set of bespoke luggage – because luxury!

In the pilot house sits a massive 30-inch curved display that controls everything from navigation to power. And speaking of power, out back is a single 100-horsepower (74-kilowatt) electric motor that comes powered by a series of lithium ion batteries. The Hydrafoil has a top speed of 40 knots, and a range of 45 miles (72 kilometers) on a single charge.

By land, the Hydra concept car takes the term "Woody" to a whole new level. Dubbed the "Woody of tomorrow," the sports car bears a striking semblance to the Mercedes-Benz AMG Vision GT concept, albeit sans roof. The Hydra concept is powered by a new NEVS electrical drive system, which has been tuned to develop up to 450 hp (335 kW), allowing the vehicle to reach speeds of up to 133 mph (215 kmh).

Last but certainly not least, the Hydros electric motorcycle is a medium-sized in-house project that may actually be making its way to production. The prototype will use a powertrain borrowed from ZERO electric motorcycles, and once completed, will be custom-tailored to meet the upscale needs of the Gray Design clientele. Features like a premium audio system with a subwoofer, and midrange speakers built into the body will be added.

Apart from the Hydros motorcycle, the Hydra collection is merely just an exercise in design. Though, if we had the money, this would make the perfect trio for cruising around Monaco... or the parking lot at Wally World.

Forged in the depths of innovation, from a blend of technology, style and speed, comes the Hydrafoil, a luxurious, high speed electric hydrofoil created to usher in a new era in seafaring. This instant icon has been designed to be at the peak of marine technology with a steerable front foil, allowing three degrees of freedom that can make adjustments 32 times per second for the ultimate amount of control at high speed. The design features sleek automotive styling both on the exterior and on the interior with full wrap-around limousine seats, multiple infotainment displays and even bespoke baggage for longer adventures.

The pilot house features an unbroken, state-of-the-art, 30 inch curved display screen from Yacht Defined. This provides a huge display surface that collects all the essential information from the yacht presented with beautiful graphics with a simple jog wheel control system to make it easy to navigate the information even at high speeds. The drivetrain is a single 100hp electric motor running on a series of lithium ion batteries. Once the foil has lifted the yacht clear of the water, it can go on to reach a stable top speed of 40 knots. The low resistance made possible by the foil means that the yacht has a range of 45 miles on a single charge. Twin 50 amp charging cables allow it to be fully recharged within 5 hours. The entire hull is constructed from a combination of carbon fiber and kevlar composite to give a high strength, lightweight construction that can withstand the rigours required for high speed performance.

A ‘Woody’ for tomorrow, because legends should not be forgotten, nor ignored. The very nature of woodgrain makes it the perfect compliment for individualized luxurious automotive creations, reminding us of the bespoke coachbuilding masters of the past. The Hydra concept is not only special because of its choice of exclusive natural materials but because of the company that it keeps. It makes up a third of the Hydra Collection from Gray Design, a trio of exclusive matching vehicles, designed to appeal to the obsessive compulsive tendencies of the world's leading vehicle collectors. Alongside it in the collection are the Hydrafoil, a high speed, open top hydrofoil, and the Hydros, an electric cruising motorcycle with matching wooden trim and automotive styling.

As the car is developed in Trollhättan, the powertrain will be based on the new NEVS electrical drive system which will be tuned to develop 450 hp through in-wheel electric motors and allow the Hydra to reach a limited top speed of 215 kph.

Currently in build, the Hydros is a venture by Gray Design into the world of electrically powered motorcycles. A medium sized in-house project, we are moving towards registering and testing the Hydros on the open roads shortly with the design intent as illustrated below. The current prototype uses a powertrain from ZERO motorcycles, and once testing is completed, we will be moving onto a custom built powertrain tailored to our requirements. The design incorporates a premium audio sound system with a subwoofer and midrange speakers built into the body.