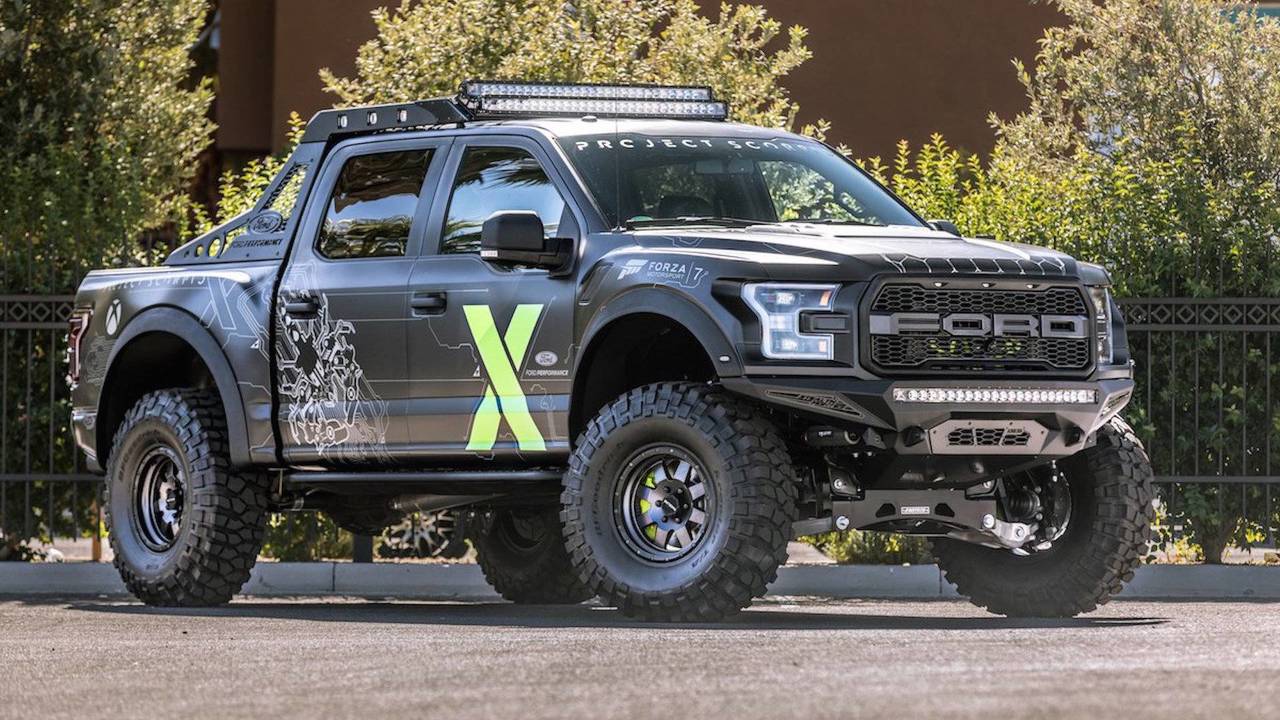 It's making its debut at SEMA this week.

On November 7, Microsoft will launch its newest gaming console – and the fourth installment in the series – the Xbox One X. In celebration, the company has teamed up with Ford Performance at SEMA to showcase a one-off F-150 Raptor in Vegas with unique Xbox branding, and plenty of added performance cues.

The aptly named 2017 Ford F-150 Raptor Xbox One X Edition comes with a number of video-game inspired design elements, including custom graphics, paint, and upholstery influenced by the Xbox One X’s internal codename, "Project Scorpio." The exterior is a subtle matte grey finish with green and white accenting features throughout, and appropriate Forza Motorsport decals.

Custom wheels, bumpers, a chase rack, and LED lighting have also been added to the package to complete the look. Performance modifications include a Fabtech six-inch lift kit, upgraded Alcon brakes, an Addictive Desert Designs intercooler, and a Ford Performance Borla exhaust.  It’s unclear how much added horsepower (if any) these modifications tack on to the standard Raptor, but the performance pickup comes from the factory with a 450-horsepower (335-kilowatts) 3.5-liter EcoBoost V6.

"We have long enjoyed and valued our partnership with Ford Performance and feel privileged to work with them on the incredible F-150 Raptor, an iconic American legend," said Mike Humphreys, Senior Director of Business and Partnerships for the Forza Franchise. "The Ford Raptor is built on top of another iconic legend, the Ford F-150 pickup, resulting in technical excellence and off-road innovations that make it a Forza fan favorite."

Following its in-person debut at SEMA, the one-off pickup will make its virtual debut in the new Forza Motorsport 7 video game, due in stores sometime next year.

In celebration of the November 7 launch of the Xbox One X, Ford Performance and Xbox have teamed up to create a specially-modified Xbox One X version of the new F-150 Raptor which will be showcased this week at the Specialty Equipment Market Association (SEMA) Show in Las Vegas. In addition, early next year, this version of the F-150 Raptor will be available for free to Forza Motorsport 7 players within the game.

“The Xbox One X is the world’s most powerful console,” said Henry Ford III, Ford Performance Marketing Manager. “It’s the benchmark in the console gaming world, while F-150 Raptor is its equivalent in the world of pickup trucks.”

“We have long enjoyed and valued our partnership with Ford Performance and feel privileged to work with them on the incredible F-150 Raptor, an iconic American legend,” said Mike Humphreys, Senior Director, Business and Partnerships for Forza Franchise, Turn 10 Studios. “The Ford Raptor is built on top of another iconic legend, the Ford F-150 pickup, resulting in technical excellence and off-road innovations that make it a Forza fan favorite.”

The partnership between Ford Performance and Xbox showcases storied brands with deep roots in performance. Whether it’s a track-shredding supercar taking on competitors at Le Mans, or the world’s most powerful gaming console that’s the best place to play gaming’s biggest blockbusters, fans win with some of the best products on the market today.

The partnership between Ford and Forza goes back over a dozen years to the first Forza Motorsport and the original Xbox. Today, Forza features more Ford vehicles than any other video game, with the Fiesta ST, Focus RS, Mustang GT 350, F-150 Raptor and Ford GT each making their video game debut in the Forza series, the latter two as cover cars.