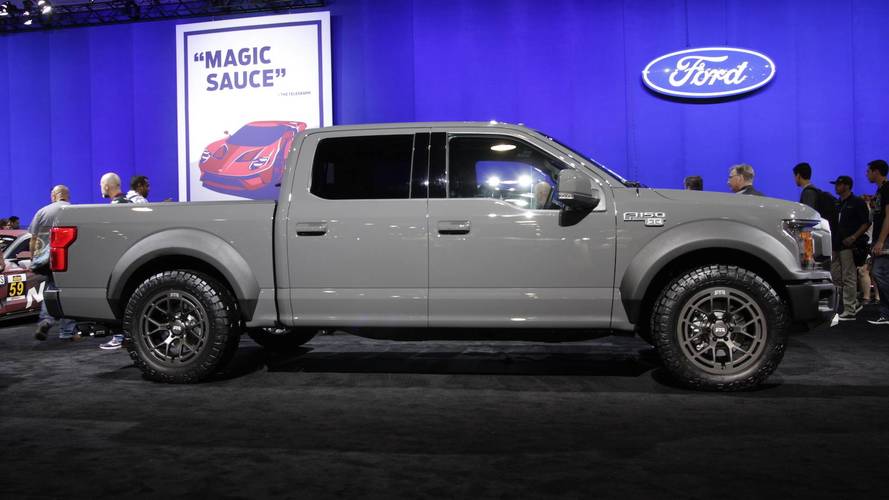 If you thought Vaughn GIttin Jr.’s 700+ horsepower (521-kilowatt) Mustang RTR was impressive, wait until you get a load of this so-called "muscle truck." Making its debut at SEMA this week, the Ford F-150 RTR concept follows essentially the same formula as the Mustang RTR before it: loads of power, and a few handsome visual upgrades, both inside and out.

The exterior, surprisingly subtle as it may be, is finished in a dark grey paint job, and comes accented by RTR’s signature grille and lighting package. Other notable upgrades to the body include new skid plates, fender flares, Tech 6 off-road wheels wrapped in 33-inch Nitto Ridge Grappler tires, and appropriate RTR badging, of course.

There are no official photos of the interior just yet, but the cabin is said to come finished in a custom RTR getup, complete with leather by interior specialist Katzkin, and even a dash plaque signed by Vaughn Gittin Jr. himself. Like the exterior, the upgrades to the interior are discreet. Thankfully, the powertrain is anything but.

Under the hood is a modified 5.0-liter V8 that sends 600 hp (447 kW) to all four wheels via a 10-speed automatic transmission. That makes it even more powerful than the 525-hp (391-kW) Raptor. Other performance upgrades like a heavy-duty rear axle and payload maximizer springs have been added to cope with all that extra power, as well as new coilovers, upgraded rear dampers, and an extended double wishbone suspension.

"The Ford F-150 RTR Muscle Truck Concept is a multi-purpose machine capable of performing the wide range of tasks all F-150's can handle, including other performance benefits the RTR Lab cooked up," said Michael Crenshaw, RTR marketing and communications director. "Whether looking for some fun off-road, drifting around the next corner, getting some air, or simply cruising the streets with family and friends in style, the F-150 RTR Muscle Truck Concept is designed for all the fun you can throw at it!"

As of yet, Ford has not plans to put Vaughn Gittin's muscle truck into production (sadly). But those interested in getting up close and personal can catch it on display at Ford’s SEMA booth now until doors close on November 4.