If you want to go off-roading, Chevrolet’s Colorado ZR2 is a fantastic choice. Extremely capable for everything from rock-crawling to high-speed running, it’ll make short work of unpaved terrain. But Chevy knows that some truck owners will want even more capability, which is why it brought two ZR2 concepts to this year’s SEMA show.

Make no mistake, these concepts are way, way tougher than the ZR2 Midnight and Dusk special editions also on display in Las Vegas. Instead, they demonstrate the next level of capability to which ZR2 owners could aspire.

Both Colorado ZR2 concepts have a new suspension developed by Chevrolet Performance that comprises specially retuned versions of the truck’s Multimatic DSSV suspension dampers, new front half shafts, unique tie rods and front ball joints, a differential cover plate, long-travel rear leaf springs, and an “anti-wrap link” for the rear axle. After those modifications, the concepts diverge in their technical characteristics.

“Our collaboration taught us that Colorado makes a great platform for building an off-road truck that can take you as far out as you want to go, safely,” AEV founder Dave Harriton said in a statement.

The ZR2 Race Development concept, meanwhile, is designed for high-speed desert running and builds on lessons that Chevy says it learned from campaigning a truck with off-road racer Chad Hall. Equipped with the same 3.6-liter V6 engine and eight-speed automatic as the factory-stock ZR2, the concept adds a 1.5-inch body lift kit, 33-inch Goodyear Wrangler MT/R tires, skidplates for the rear shocks and rear differential, a tough steel driveshaft, new wheel spacers with longer wheel studs, and a performance-focused air intake and exhaust. But perhaps most important, the truck’s DSSV dampers are a long-travel version that was specifically retuned for the type of high-speed off-road use. 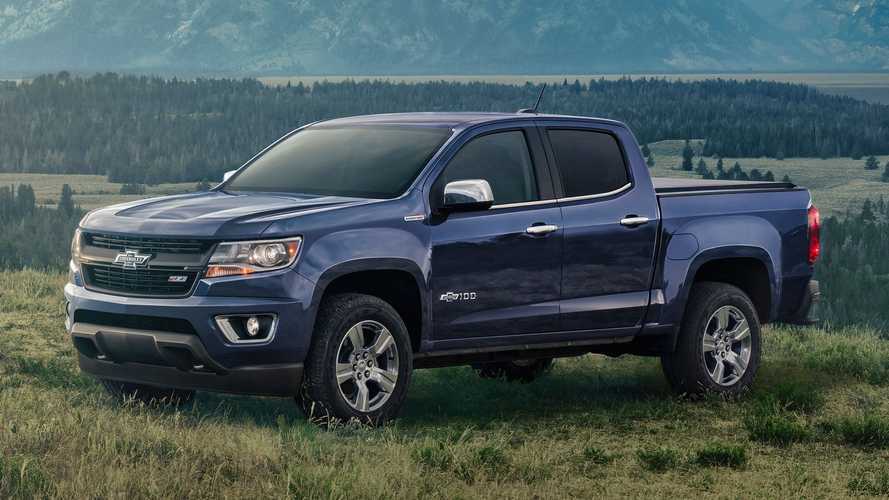 LAS VEGAS — Chevrolet is expanding the performance envelope of the segment-redefining Colorado with the Colorado ZR2 AEV concept and ZR2 Race Development Truck.

Revealed at the SEMA Show today, the trucks demonstrate the capability of Colorado and its off-road performance variant, the Colorado ZR2.

“Colorado has reignited the midsize segment with class-exclusive features and performance,” said Jim Campbell, U.S. vice president, Truck Strategy, Performance Vehicles and Motorsports. “Some customers want even greater capability, and the ZR2 AEV concept and ZR2 Race Development Truck showcase the efforts we’ve made to explore how owners can get even more from their trucks.”

“ZR2 puts an exclamation point on Chevy’s off-road engineering ability,” said AEV founder Dave Harriton. “Our collaboration taught us that Colorado makes a great platform for building an off-road truck that can take you as far out as you want to go, safely.”

The ZR2 Race Development Truck builds on the ZR2’s desert-running capability with a long-travel version of the stock truck’s DSSV shocks. These are tuned for high-speed off-road use, adding unique parts validated by Chevy Performance Engineering and legendary off-road racer Chad Hall in the Best in the Desert racing series:

“Colorado can play any way you want,” said Campbell. “The work with AEV and Hall Racing acknowledges the strengths of our midsize platform, with both SEMA entries showcasing the versatility that’s already made Colorado a resounding success.”

Colorado celebrates its three-year anniversary this month, with more than 250,000 sales in 36 months. Colorado also boasts the segment’s first applications of 4G LTE Wi-Fi and Apple CarPlay, along with safety features such as Forward Collision Alert and Lane Departure Warning.