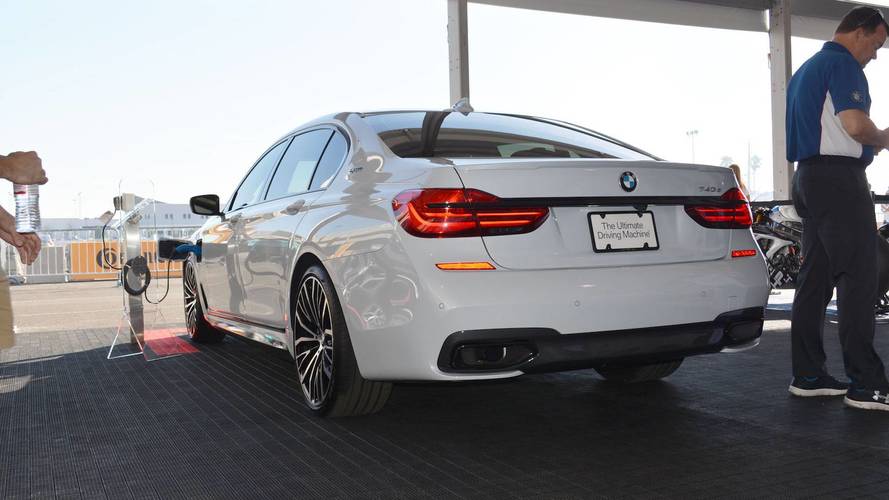 This year's edition of the SEMA show is turning out to be a BMW fest.

We’re officially calling it BMW Day here at Motor1.com as after checking out special M3, 440i, and M5 models, it’s now time to move further up the range and have a look at the flagship 7 Series. Seen here in the thrifty 740e specification, the plug-in hybrid fullsize sedan has also received a bonanza of M Performance components on the outside combined with BMW Individual upgrades on the inside.

Starting with the front of the car, the electrified 7 Series comes with a sportier bumper as well as blacked-out kidney grilles. The tweaks continue on the side profile where the mirror caps have been covered in carbon fiber and the wheels have been bumped to a 21-inch size with blue calipers part of the M Sport brakes. The so-called “hockey stick” comes with a glossy black finish also noticeable around the windows and on the M Performance-branded side skirts. At the back, a discreet trunk lid spoiler rounds off the changes on the outside for this large BMW sedan.

Inside, BMW Individual has decided to go with a Merino leather upholstery in Fiona Red not just for the seats, but also for the lower half of the dashboard and the door panels. Speaking of which, a piano black trim has been installed on the doors to complement a similar finish applied onto the center console. Being a showcar, it’s no wonder this particular 7 Series comes with a generous array of optional kit, including the $3,400 Bowers & Wilkins surround sound system and the $2,700 rear-seat entertainment system, just to name a few.

On a related note, SEMA is also the venue where BMW has on display the new X3 crossover equipped with numerous original accessories. These include bicycle racks ($5,900 Specialized matching bike available), two-tone alloy wheels, and BMW-branded valve caps together with miscellaneous items for the cabin.