Couple Crashes Into Each Other, Vintage Camaro Pays The Price 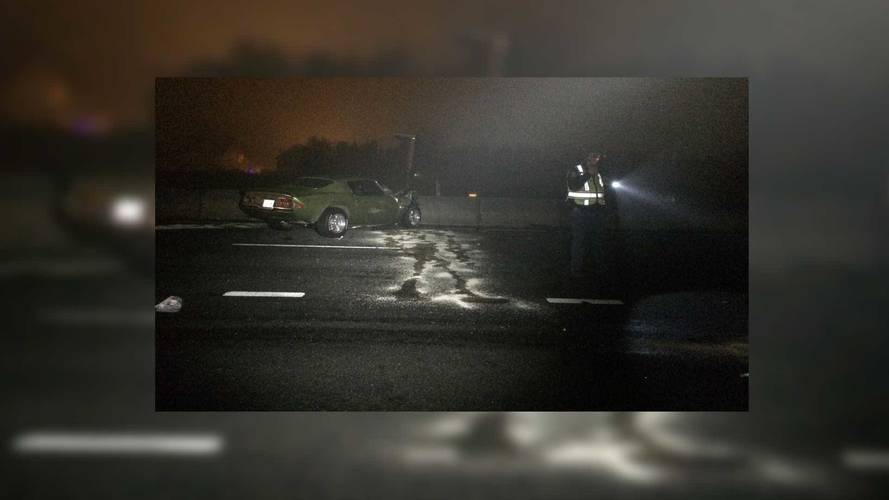 The family that crashes together stays together, unless one wrecks a sweet Camaro.

We would love to be a fly on the wall the next time these two lovebirds are alone together in the same room. It’s hard to say when that might be because both were charged with driving under the influence, and if the police are smart they won’t put them both in the same cell anytime soon. That’s because this couple – driving separately last Thursday in Springfield, Oregon, somehow crashed into each other, totaling out a vintage 1973 Chevrolet Camaro in the process.

According to KVAL News in Eugene, both were driving on Highway 126 late Thursday when 41-year old Genevieve Daley spun out in her red 2003 Pontiac Grand Am, slamming headlong into the concrete center divider. Following close behind was 45-year old William Grace, which KVAL identifies as Daley’s boyfriend. Apparently he was following a bit too close, because he drove his 1973 Camaro square into the side of her, eventually coming to rest on the concrete barrier himself.

The damage in the photos looks pretty extensive on both cars, especially on the Pontiac. We can live with one less Grand Am in the world, but seeing the crumpled front clip on the Camaro is heartbreaking to say the least. That’s especially true from a financial standpoint, as early second-generation Camaros have enjoyed quite a jump in value over recent years.

We don’t know what caused Daley to spin out in her Grand Am, but both were taken to the hospital for minor injuries. And yes, both were apparently under the influence of something, though the story doesn’t exactly say what. Yeah, she spun out in front of him, but he was obviously wasn’t in the best position following her either. We’d say the blame is definitely shared on this one.

It was initially reported that the two were fighting, but police later said that wasn't the case. We're fairly certain, however, that they'll be fighting now.